Britain’s complicity in backing another tyrant to replace Mugabe has betrayed a suffering people. 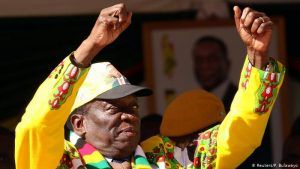 A friend of mine went to the supermarket near her home in Harare at the weekend and bought six cartons of milk, a bunch of bananas and bones for her dog. Then she braced herself for the six-hour queue at the petrol pumps and went to fill up the family saloon. By the time she arrived home, this simple excursion had cost her close to the typical monthly salary of a mid-level civil servant in Zimbabwe. “And you know what,” she added. “I’m so embarrassed since I know most of the cashiers can’t afford to shop at their store.”

Once again, this beautiful but blighted nation is in crisis. One doctor told me there were no drugs in her hospital. There is no water most of the time, the electricity cuts off 18 hours a day and many families are going hungry. A western businessman, fighting to keep his company afloat when there is no power to run his plant, no fuel to transport goods and no cash to pay staff, said one in 12 of his employees had fled the country in recent weeks. “Good luck to them,” he said ruefully. “This is the worst it has been here for more than a decade.”

How quickly that burst of optimism after the overthrow of Robert Mugabe two years ago has turned to despair. When security chiefs engineered a coup, they promised things would change after 37 years of repression, rampant corruption and gross economic ineptitude that led to the second-worst hyperinflation in history. His hands may have been stained in blood as Mugabe’s former enforcer but Emmerson Mnangagwa, the new president, declared Zimbabwe was “open for business” after taking power.

Never mind his nickname, the Crocodile, nor the shooting of citizens when an election result was delayed amid claims of fraud and voter intimidation. Mnangagwa wooed gullible foreign politicians, wore the scarf in national colours adopted by pro-democracy activists, hired public relations people to polish his image and turned up at Davos to hobnob with the global elite.

“I am working toward building a new Zimbabwe: a country with a thriving and open economy, jobs for its youth, opportunities for investors, and democracy and equal rights for all,” he claimed as he pledged reform and promised freedoms.

But while the 95-year-old Mugabe lies sick in a Singaporean hospital, darkness has again descended on the country he helped free from British colonial rule in 1980. Rival factions in the ruling Zanu (PF) party bicker like balding men over a comb, among them allies of “Gucci” Grace, the loathed former first lady once accused of trying to poison the ruthless Mnangagwa with ice cream from her stolen dairy farm. Inflation is rocketing again, estimated to be running at 500 per cent annually, while critics are charged with sedition, activists tortured and demonstrations over a deteriorating economy are met with brutal force by baton-wielding security goons.

One United Nations agency says that within months almost half the 17 million population might struggle to eat a single meal a day in a country once called Africa’s breadbasket. The government blames drought. But the big issue is, yet again, blundering by a despotic regime focused more on plundering wealth than helping its people, symbolised by its dismal efforts to shore up the crashing new Zimdollar currency with foreign currency banned two months ago. “It is not like before when there was no food in the shops,” one Harare resident said. “Now there is plenty of food but no money to buy it. It feels surreal, more uncertain than ever.”

Many Zimbabweans are dismayed by the speed of this latest decline. But despite joyful celebrations over the November 2017 coup that ousted “the old man”, there should be no surprise over the failure to deliver a better future when the same old Zanu (PF) faces are seen in charge of their country.

Britain has joined the European Union and United States in speaking out against the human rights abuses. To our shame, however, few outsiders were more complicit in cheering on the coup and promoting Mnangagwa’s cause than British officials in their desperation to regain influence.

Three years ago our diplomats backed an attempt to bail out Mugabe’s government, to the fury of Washington, with one key player confirming to me their involvement in a misguided effort to impose monetary stability. Opposition figures believe Britain went on to back Mnangagwa actively and assist his cosmetic makeover into a reformer.

After the new president’s first 150 days in office, Boris Johnson as foreign secretary praised Zimbabwe’s “impressive progress”. One local source said a British diplomat apologised this year for their supportive stance after 17 people were killed, 16 raped and 900 arrested during a crackdown on fuel price protests.

Mnangagwa, who is 76, was linked to the worst excesses of the Mugabe era, with a history of crushing dissent despite his sudden pose as a democrat. Yet once again, Britain fell for the arrogant delusion that autocrats are a safer bet than democracy in turbulent places — just as in so many other African and Middle Eastern nations, from Egypt and Saudi Arabia through to Rwanda and Uganda. Now we see the legacy of such stupidity as Zimbabwe disintegrates, its people suffer more distress and the Crocodile devours any lingering hopes of change.