History has clearly demonstrated that party politics, lack of accountability and lack of policy responsiveness destroy effective service delivery. We should not be blind to the fact that both government and the Harare City Council have collectively contributed to the current water crisis by breeding corruption, inconsistent policy making practices, poor planning and exclusive decision-making. 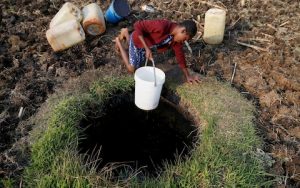 We should not be blind to the fact that both government and the Harare City Council have collectively contributed to the current water crisis by breeding corruption, inconsistent policy making practices, poor planning and exclusive decision-making. The current Harare water crisis should be a wake-up call not only to the government but to all concerned stakeholders to be awake to the dire effects of poor governance and the economic decline ensuing in our country.

Other factors that have led to the water crisis in Harare include poor economic performance whose key driver has been corruption and financial mismanagement at both local and central government level; poor waste management practices by the Harare City Council which has seen raw sewer finding its way into Lake Chivero as well as bad environmental governance that has resulted in the destruction of wetlands which are important water sources for Harare.

Furthermore, the statement issued by the Acting Minister of Local Government, Hon. Ziyambi, where he attributed the current water crisis to ‘sub-economic tariffs’ being charged by Harare City Council, is worrisome, as it clearly demonstrates a desperate attempt by government to hide behind a finger.

Surely, the current water crisis cannot be attributed to sub-economic tariffs being charged by Harare City Council. It is myopic to constrict water and sewer reticulation services to tariff thresholds. Water is a capital project that the Government should have actively supported and invested in, way back in 2008 when more than 4000 lives were lost to cholera due to poor water quality and quantity.

There have been numerous outbreaks of cholera and typhoid since then; water shortages have progressively become worse over the years, but government did not do anything despite numerous calls from residents associations to address the situation.

Furthermore, it should be noted that government departments are among the largest debtors of Harare City Council, the parent Ministry included. Government owes almost half a million to the City Council in unpaid debts.

It is highly irresponsible and unacceptable for leaders to seek to gain political mileage and shift blame when residents are sitting on a health time bomb.

It is quite apparent that over the years, the government has failed to consider water provision as one of its top priorities.

For over two decades, residents of Harare have been told that water woes will be a thing of the past and there is always talk of the Kunzvi dam project whenever we approach general elections yet there is nothing tangible on the ground.

Government’s sincerity and commitment to water provision in Harare is very much in doubt and we are concerned over the continued allocation of paltry amounts to the council for procurement of water treatment chemicals. Harare needs at least $45 million RTGs per month to purchase Water treatment chemicals and the $37 million offered by government is not enough.

You will also note that as a result of the failure by council to repair water pipe leaks, about 60 percent of Harare’s water is being lost through leakages.

The council has also maintained a huge wage bill with $12 million of the $15 million collected monthly going towards salaries at the expense of effective service delivery.

We are awake to the fact that residents owe the council millions and on our part as CHRA, we are making strides, through our community outreach programmes to urge residents to pay their dues to council.

In the same vein, we urge government, council’s biggest debtor, with a debt of nearly 450 million to play their part and pay their bills to council.

CHRA has already rolled out a community engagement program where residents are also calling for government to declare the water crisis a national disaster so as to open avenues for humanitarian assistance. Communities are also in the process of signing a petition to the same effect that will be submitted to Parliament and the Ministry of Local Government.