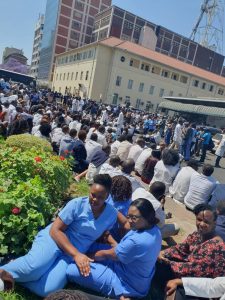 We the Trade Unions, Social movements and Civic Society leaders in Zimbabwe;

Realising that the footprints of Cde Peter Mugombeyi’s abduction resonate with many other previous abductions.

The abductions are characterised with night attacks by men armed with AK 47 riffles travelling in the night with unmarked and unregistered vehicles.

These are recognisable footprints of the ruling elite’s attitude to dissent and opposition.

Post independence we have had unfortunate disappearance and torture of Civic and opposition activists, including but not limited to Paul Chizuze, Nabayama, Tonderai Ndira and Itai Dzamara among others.

We are in full support of the Doctors’ cause of salaries being indexed and pegged at interbank rate. This should also apply to all Public service workers and the broad spectrum of the working class;
Understanding that this barbaric act has resulted in more loss of life as doctors and nurses across the country have downed tools demanding the urgent release of Peter Mugombeyi;

1) The immediate unconditional release of Doctor Magombeyi, he must be returned to his family unharmed and in good health.

2) Full conclusive investigation for this and other previous abductions.

4) The respect of human life and dignity

We hereby give the government of Zimbabwe 24 hours to bring back Dr Peter Magombeyi to his family unharmed and in good health.

We further call for the immediate restoration of value of all salaries through indexing them with prevailing interbank rates.

Tomorrow 17 September 2019 we will reconvene at 1300hrs and issue a way forward if our demands are not met by then.

We call upon all Citizens to stand in Solidarity with our Doctors.

The following organisations were in attendance.