The International Day of Peace instituted by the United Nations is observed annually on the 21st of September and is devoted to promoting the principles of peace. 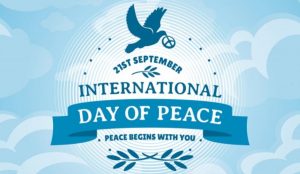 This year’s theme is  “Climate Action for Peace”

Peace has been defined by the Oxford Dictionary as a societal concept of harmony and friendship in the absence of violence and hostility. Since 1981, the United Nations General Assembly has pledged itself to realising and commemorating peace on the 21st of September. The day calls for countries to reflect on the work they have been doing to try achieve peace, take an audit of how far they have come and see how better achievement for peace can be mapped from here on fourth.

This year’s theme draws on the member states’ commitment to the 2030 Sustainable Development Goals. Goal 13 calls for urgent action to combat climate change and its impacts. Since the turn of the century, it has become more evident that threats to peace are not just in wars and conflicts anymore, climate change can affect harmony and friendship. Climate change is now a considerable threat as it is the root of droughts, floods, monsoons and hurricanes in places that traditionally would not be exposed to such harm. With these changes come threats to food security as well as general public health. It is not just a one man problem, it is something that affects us all.

As is the custom on the morning of International Day of Peace, the UN Secretary General rings the Peace Bell. The Bell is rung as a prayer for world peace. The Secretary General Antonio Guterres this year after ringing the bell said that it is “only by working together can we make our home peaceful, prosperous and safe for us and future generations”.  Earlier on in New Zealand, he made it clear that for the world at large to meet the climate goals there is a need to tax pollution and not people, stop subsidizing fossil fuels, stop building coal plants by 2020 and to focus on green economy and not the grey economy. This is something Zimbabwe should take heed to and turn away from coal plants to renewable and sustainable energy.

To substantiate the calls he has made, the Secretary General set up the Summit on Climate Action on the 23rd of September 2019 to discuss and implement the Paris Agreement. Zimbabwe acceded to the Agreement in 2017.  Countries are expected to devote themselves to having a culture of peace ,take climate action seriously and commit to decreasing the global temperature rise.

The UNCHR has also called upon the youths of the world to participate more in conversations and action regarding climate change. One such youth who has taken up the challenge is 16 year old Greta Thunburg from Sweden who has made waves on the subject as she has led numerous protests at home and recently in Washington and has given a speech in New York at the UN Youth Climate Summit over the need for countries to pay real attention to climate change.  She has urged the world to  look at the climate change as the “existential crisis that it is”.

Turning to Zimbabwe, climate change has been affecting the country drastically. According to a meteorological office, the past 6 years have been Zimbabwe’s hottest in history. Several youth groups have taken interest in climate change but there is still a lot more ground to cover. Law faculties across the nation have established clubs on climate law and a Climate Change Symposium for university students was held in July. More students are urged to take up the mantle as this affects their future directly as well as future generations.

As the world commemorates this day, we take this opportunity to urge our government to take climate action seriously and work around long lasting solutions to avoid future droughts as well as deal with the energy and water situation in the country. It will not be easy but as Former Secretary General Boutros-Boutros Ghali once said, ” Peace is precious. It is not enough to yearn for peace. Peace requires work – long, hard and difficult work”.