Are they changing his clothes too? 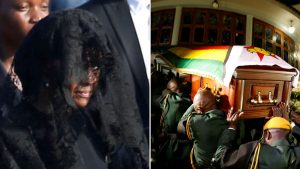 How many coffins does former president Robert Mugabe have? Are they changing his clothes too? A lot of people only got to see Mugabe’s new coffin following South African opposition leader Julius Malema’s visit to Zimbabwe to meet the Mugabe family and former First Lady Grace Mugabe.

The special body viewing that Malema and his Team was given gave a chance to those who had not yet seen Mugabe’s new coffin a chance to have a glance, through the Media and Press.