The 30th of August is the International Day of the Victims of Enforced Disappearances.  TheUN Secretary-General’s message for this day in 2019 was: 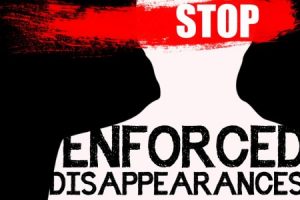 “I call on States to do more to prevent enforced disappearances and bring to justice those responsible.  To this end, I call on countries to cooperate fully with UN mechanisms.  I also urge all States that have not yet done so to sign, ratify or accede to the International Convention for the Protection of All Persons from Enforced Disappearance.”

The International Convention for the Protection of All Persons from Enforced Disappearance[link] was adopted by the UN General Assembly on 20 December 2006.  The convention states that enforced disappearance occurs when:

“persons are arrested, detained or abducted against their will or otherwise deprived of their liberty by officials of different branches or levels of Government, or by organized groups or private individuals acting on behalf of, or with the support, direct or indirect, consent or acquiescence of the Government, followed by a refusal to disclose the fate or whereabouts of the persons concerned or a refusal to acknowledge the deprivation of their liberty, which places such persons outside the protection of the law.

On 21 December 2010 the UN General Assembly expressed its deep concern about the increase in enforced disappearances in various regions of the world and set a day to mark the International Day of the Victims of Enforced Disappearances.  The UN continues to express concern that whereas in the past enforced disappearances were mostly a tool of military dictatorships, nowadays enforced disappearances are perpetrated in situations of internal conflict, especially as a means of political repression of opponents.  Of particular concern is:

The families and friends of the victims suffer anguish, not knowing whether the victim is still alive and, if so, where he or she is being held, under what conditions, and in what state of health.  The family’s distress is frequently compounded by the material consequences of the disappearance.  The disappeared person is often the family’s main breadwinner.  In some cases, national legislation may make it impossible to draw a pension or receive other means of support in the absence of a death certificate.  Economic and social marginalization is frequently the result.

Enforced disappearance has frequently been used as a strategy to spread terror within a society.  The feeling of insecurity generated by this practice is not limited to the close relatives of the disappeared, but also affects their communities and society as a whole.

When committed as part of a widespread or systematic attack directed at any civilian population, a “forced disappearance” qualifies as a crime against humanity and, thus, is not subject to a statute of limitations.  This means the victims if they survive and the victims’ families will always have the right to seek reparations, and to demand the truth about the disappearance of their loved ones.

Zimbabwe is still not a State Party to the Convention for the Protection of All Persons from Enforced Disappearance.

We call upon the Government of Zimbabwe to accede to the Convention.