We the undersigned civil society organisations convened under the banner of the People Matter Campaign express our deep concern over the escalating persecution of trade unionists, civil society leaders and human rights defenders. 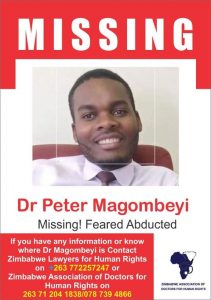 We note with concern the abduction of the Zimbabwe Hospital Doctors Association, Dr Peter Magombeyi on Saturday 14 September 2019. The abduction of Dr Magombeyi follows the ongoing industrial action by medical doctors in Zimbabwe demanding a decent living salary. We reiterate our calls for his immediate release and call on the Government of Zimbabwe to immediately stop persecuting unionists and human rights defenders.

As a collective of unionists, civil society and churches, we reiterate our position that the Government of Zimbabwe must uphold the Constitution, respect for human rights and adhere to all full tenets of democracy.

We are worried that:

Over the years Zimbabwe has a history of enforced disappearances with prominent activists such as Edson Sithole, Itai Dzamara, Rashiwe Guzha, Patrick Nabayama, Ghandi Mudzingwa and Jestina Mukoko. Some were eventually found and arraigned before courts on spurious charges while others have never been accounted for.

We thus note that:

We fear that if the situation continues unchecked, there are greater chances of an escalation of social unrest and instability in Zimbabwe. This might result in regional instability as Zimbabweans seek food, shelter and refugee in neighbouring countries and therefore demand and recommend the following:

We urge the Government of Zimbabwe to refocus its energies on an inclusive national reforms program that seeks to broaden and strengthen democratic space and development. The persecution of unionists and CSOs leaders only dampen efforts at achieving a shared national consensus to reform. We reiterate our call for an inclusive process on the national dialogue that brings all stakeholders together.

We further clarify that in our view the national dialogue that we continue to call for is not predicated on creating another version of a Global Political Agreement or an elite power-sharing deal. We reiterate that our envisaged national dialogue should be a reform process that seeks to safeguard the interest of citizens by restoring the Social Contract between the citizens and those that govern and uphold human security in Zimbabwe.

In this regard, we hold the firm view that the national dialogue process must never be restricted to political parties but should rather bring on board a cross-section of stakeholders that include civic society, labour, women, youth, religious groups, business among other critical stakeholders.

We further call on the Government of Zimbabwe to prove its sincerity by ensuring that Zimbabwe has a conducive environment for holding an inclusive dialogue process in the wake of state-sponsored terror that has increased fear levels amongst citizens. To create a conducive environment and as part of confidence and trust-building in the national dialogue, the government must immediately meet the following conditions:

We reiterate our position that persecution of human rights defenders and trade unionist in Zimbabwe pose serious human security challenges for ordinary citizens and the global democratic order and restate our commitment to defend the Constitution of Zimbabwe. The Government of Zimbabwe must be guided by the Constitution and a firm commitment made to uphold the Rule of Law and Respect for fundamental human rights.

Signed by the members of the People Matter Campaign: