HARARE, Zimbabwe — When Zimbabwe turned off the internet during a recent crackdown, Obert Masaraure, a prominent government critic, had no way of knowing when it was safe to emerge from hiding.

HARARE, Zimbabwe — When Zimbabwe turned off the internet during a recent crackdown, Obert Masaraure, a prominent government critic, had no way of knowing when it was safe to emerge from hiding.

He waited one day, then another. On the third day he broke cover, hoping that a wave of arrests had come to an end.

He was seized at home by soldiers 12 hours later.

“If I had been connected,” Mr. Masaraure said, “maybe I would have got information that it wasn’t safe to be out there.”

Internet shutdowns have become one of the defining tools of government repression in the 21st century — not just in Zimbabwe, but in a growing number of countries, mainly in Asia and Africa, that are seeking to quash dissent.

The shutdowns do more than stunt the democratic process. They can batter whole economies and individual businesses, as well as drastically disrupt the daily life of ordinary citizens, turning the search for mobile service into a game of cat and mouse with the police and driving people across borders just to send emails for work.

The Indian government employs the practice more frequently than any other, most recently in Kashmir, but it is not alone: In 2018, there were at least 196 shutdowns in 25 countries, up from 75 in 24 countries in 2016, according to research by Access Now, an independent watchdog group that campaigns for internet rights. In the first half of this year alone, there were 114 shutdowns in 23 countries.

In all, more than a quarter of the world’s nations have used the tactic at one point or another over the past four years.

Typically used during times of civil unrest or political instability, a shutdown allows officials to stifle the flow of information about government wrongdoing or to stop communication among activists, usually by ordering service providers to cut or slow their customers’ internet access.

While authoritarian countries like China and Iran have long blocked some international websites that they consider subversive, like Facebook, an internet shutdown is usually a temporary measure, often wielded by governments that have historically had a less systematic approach to internet censorship.

“People always had this simplistic view that technology could only be used in one way — that it was this great tool for democracy,” said Kuda Hove, a digital rights researcher at the Media Institute of Southern Africa. But after the emergence of the shutdown, he said, “it dawned on them that the government could use technology against the people.”

Governments sometimes justify their actions as an attempt to stop the spread of “fake news” or hate speech, or to keep students from cheating during exams. But these explanations often mask the real motivation, said Berhan Taye, who leads research into internet shutdowns at Access Now.

“Internet throttling and internet shutdowns are an extension of traditional forms of censorship,” Ms. Taye said. “This is not a unique phenomenon — it’s an extension of what’s happening in countries where civil space is already shrinking.”

The economy often pays the price, research suggests. In countries with a medium level of internet penetration — that is, where 49 percent to 79 percent of the population has internet access — a shutdown might dent daily economic activity by $6.6 million per 10 million people, according to analysis by Deloitte, an international accounting firm. 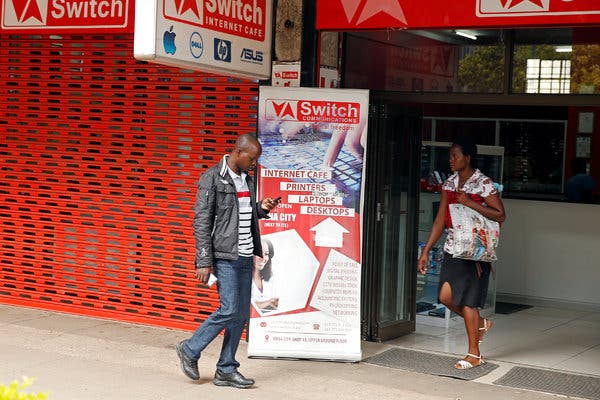 From July 2015 through June 2016, shutdowns caused global losses of more than $2.4 billion, according to the Brookings Institution, a research group.

The six-day shutdown in Zimbabwe in January was meant to target opposition demonstrations, but it also ended up severely hindering businessmen like Peter Makichi, a fuel merchant.

As the agent for a South African gas company, Mr. Makichi was meant to wire his suppliers more than $100,000 every three days. The shutdown prevented him not only from transferring the money for several days, but also from emailing his clients, who then canceled his contract.

The cancellation forced him to close three of his four branches and fire 27 of his 35 workers, reducing his profits more than 90 percent every month, Mr. Makichi said.

On the outskirts of Harare, Zimbabwe’s capital, most customers at Wisdom Fore’s grocery store had money to pay for food, but not the means to access it.

Because of a bank note shortage, many transactions in Zimbabwe are made through mobile payment systems, even small purchases. But the system needs the internet to function, so Mr. Fore ended up throwing away most of his perishable food and losing about half his daily turnover.

The shutdown even hit the music industry. Ameen Jaleel Matanga, a popular singer who performs as Poptain, had intended to release his latest music video on the first day of the internet outage. The shutdown prevented him from uploading it, and that delay disrupted his business plan for the whole year.

“Due to a network shutdown, the economy shuts down,” said Mr. Fore. “The flow of everything slows.”

In some countries, that has even included the supply of crucial medicines and the deployment of medical professionals.

In Sudan, the interim government shut down the internet for a month, principally to obstruct opposition activity after the ouster of President Omar Hassan al-Bashir. But it also stopped Sudanese doctors from ordering new medicine, leading to shortages of diabetes treatment, and prevented protest leaders from using WhatsApp to call for medical assistance, according to Dr. Sara Abdelgalil, who coordinates supplies in Sudan via the internet from her home overseas.

“We had a WhatsApp group in which we’d say, ‘We need a surgeon in Omdurman, we need an anesthetist in Buri,’” said Dr. Abdelgalil, the president of the British chapter of the Sudanese Doctors’ Union, which supports Sudan’s transition to civilian government. “All that became very difficult.”

In parts of the developing world, merchants derive most of their revenue by advertising their products in public WhatsApp groups, which allow sellers to send advertisements to hundreds of recipients at a time. During a shutdown, those groups turn into online ghost towns.

Patrice Binwa Naledi runs a series of such forums in the Democratic Republic of Congo, where the government stopped the internet for 20 days this year, nominally to prevent rumors spreading while votes were counted from the presidential election.

But during the shutdown, “it was like the phones had stopped working,” he said. “It was very calm — and when it’s calm, for me it’s sad.”

To circumvent a shutdown, citizens have sometimes traveled for miles to get brief bursts of internet access.

In Cameroon, a shutdown blocked internet access in the restive, English-speaking western regions of the country, on and off, for 240 days in 2017 and 2018.

To keep communications flowing, residents there would draft emails on their phones and hand them to friends and colleagues who were traveling to Francophone regions, said Rebecca Enonchong, an internet entrepreneur in Cameroon.

Once the phones were carried over the invisible border between English- and French-speaking provinces, the emails would send.

“Everyone was doing it,” Ms. Enonchong said. “You would give someone the device, and they would come back with the device at the end of the day.”

But the workaround was not enough to save many digital-based firms in the affected regions, which were the epicenter of the Cameroonian technology business. “Imagine shutting down the internet in Silicon Valley,” said Ms. Enonchong, who runs digital innovation centers in both Anglophone and Francophone areas. “That’s the equivalent of what happened in Cameroon.”

In eastern Congo during the shutdown, businessmen were forced to travel to Rwanda for the day to read their email. Arsène Tungali, who runs a translation business in Goma, Congo, regularly drove to the border and waited for an hour to get his papers stamped, before heading to a Rwandan restaurant to set up a temporary office for the day.

The cost of additional fuel, as well as food at the restaurant, cost him an extra $100 a week. And the whole process created untold complications.

“If the email I was expecting hasn’t arrived, I have to decide whether to go back across the border, or to wait until the person I was waiting for has got connected,” said Mr. Tungali. “But that means delaying the things I need to do back in the office.”

In the capital, Kinshasa, people gained access to the internet by secretly buying SIM cards from the Republic of Congo, a separate country just across the Congo River, at a vastly inflated price. Once they were sure the police weren’t looking, they would loiter on the riverbank until they picked up nearby mobile networks.

“It became a bit like a drug deal,” said Lemien Sakalunga, a journalist based in Kinshasa. “You’d buy a SIM, and you’d hide it immediately. The vendor would say: Hide it, hide it, hide it. Then you’d move as quickly as you could, as far as you could.”

In Zimbabwe, a growing number of people have downloaded virtual private networks, systems that allow users to circumvent some internet restrictions. But V.P.N.s are often themselves blocked by the government, and those that work are often too slow to be useful, said Mr. Hove, the digital rights researcher.

Besides, V.P.N.s might not be enough if governments adopt more sophisticated forms of internet censorship.

The Zimbabwe government already appears to be harnessing the internet to its advantage, using software to surveil opponents and sending armies of trolls against its critics, Mr. Hove said.

“The next battle in my view isn’t going to be against the government shutting down the internet — that’s maybe too obvious, and with the level of international condemnation they received, they might not do it again,” he said. “But they may step up attempts to drown democratic discourse online.”