The MDC is gravely concerned by the attacks on fellow Africans including Zimbabweans who have adopted the Republic of South Africa as their second home. The MDC appeals to authorities in South Africa and regional leaders to immediately take mitigatory measures to stop the current scourge of Afrophobia, protect fellow Africans and decisively deal with structural challenges where victims are coming from  including Zimbabwe. 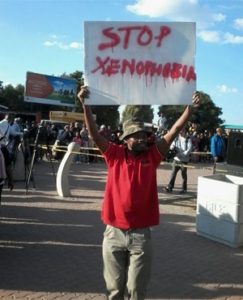 The Human Rights Watch has reported more than 200 foreign truck drivers who have been killed since March 2018 in South Africa. The fresh round of attacks comes at a time the Southern African Development Community (SADC) is deepening regional integration through calling for the collapse of borders and free movement of people, goods and services as coded in the Regional Indicative Strategic Development Plan and the SADC Common Agenda. This vision is also echoed by the African Union (AU) through  Agenda 2063.
Such Afrophobic attacks are therefore a negation of these regional and continental aspirations, anchored on Pan Africanism and African renaissance. The attacks are an affront to our common humanity and inter-dependency as espoused in our African philosophy of Ubuntu.
South Africa is reminded of the support it received from across Africa during the anti-Apartheid struggle. It received immense moral and material support from many African countries who provided training camps for the uMkonto weSizwe cadres, financial support and moral solidarity. African countries took the lead in mobilising for the isolation of the Apartheid regime. Countries like Zimbabwe, Lesotho, Mozambique, Zambia, Botswana and Angola paid heavy prices for supporting the anti-apartheid movement including the frequent bombing and destruction of their infrastructure. We urge the South African Government to act on the ongoing brutal attacks, respect the sanctity of human life and protect fellow Africans.
More than  3 million  Zimbabweans have migrated to South Africa owing to a political crisis in Zimbabwe that has resulted in a worsening socio-economic situation. The MDC continues to call SADC and particularly South Africa to intervene in the Zimbabwean political crisis in order to find a lasting solution that will get the country back on the path to democratic consolidation and economic recovery.
The MDC proposes a  Roadmap to Economic Recovery, Legitimacy, Openness and Democracy (RELOAD) as the pathway that can restore Zimbabwe’s political and economic well-being. The roadmap identifies five critical steps including a mediated, bankable and genuine national dialogue, comprehensive political and economic reforms and free and fair elections that are internationally supervised. The South African  Government and the regional body have a role in facilitating a legitimate and credible dialogue in Zimbabwe as a means to end the suffering of Zimbabweans and concomitant domino effects to the region.