An Alexandra resident, Melissa Mzizi, says the police are doing little to help her get her family's RDP house back after a group of 40 people allegedly attacked her husband and occupied their home. 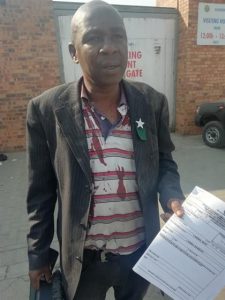 Gibson Mzizi, Melissa Mzizi’s husband, was attacked with an axe by a mob who forcefully evicted the family in Alexandra. (Chris Yelland)

An Alexandra resident, Melissa Mzizi, says the police are doing little to help her get her family’s RDP house back after a group of 40 people allegedly attacked her husband and occupied their home.

On Saturday, the group reportedly attacked the family in an attempt to kick them out of the home. Mzizi’s husband was taken to hospital after he was hit in the head with an axe.

Alexandra police have since arrested five people. The rest remain in the house.

President Cyril Ramaphosa said his apology to Zimbabweans over the weekend was a must after xenophobic attacks over the last two weeks tarnished South Africa’s international reputation.

Mzizi also said the group had also come to her house the week before, while she was at a neighbour’s house.

While they were unsuccessful in their attempts to get the house, Mzizi said a man threatened her and her daughter.

She said the man was not one of the five arrested on Saturday when the group once again returned.

This time, Mzizi felt outnumbered, and started gathering her belongings, with the people throwing the rest of her things into the street.

She said while she was inside the house she, “heard a noise outside like when people see something or when they’re fighting,” Mzizi recalled.

“I had to run outside and that’s when I saw they were hitting my husband. He was already on the floor and they were hitting him, about 20-something people. All I saw was blood everywhere. I screamed: ‘What are you doing to my] husband? Why do you want to kill him?'”

Mzizi said they stopped after this but her husband was already bleeding profusely.

The mob allegedly beat her husband with sticks and took an axe to the back of his head.

According to Mzizi, the family went to Alexandra police station to get help but were made to wait two hours before an ambulance came. Her husband was in and out of consciousness as he laid his head on Mzizi’s lap.

She claimed the police refused to take them to the clinic “in case something bad happened” on the way.

When the ambulance finally arrived, Mzizi’s husband was given 14 stitches and medication. They returned to the police station to open a case and seek assistance to get their house back.

When police arrived at the house with Mzizi’s husband, however, the group of people were allegedly drinking alcohol, singing and cooking Mzizi’s food.

She added that when the police went into the house, the group started to break the windows, saying: “We don’t want foreigners in South Africa.”

Mzizi’s husband is from Zimbabwe and a naturalised South African.

The family have since taken refuge at Mzizi’s employer’s house, where she is a domestic worker.

She said this was not first time this has happened to her family, saying the attacks started in December 2018 when a group of 100 people showed up at her house to force them out.

Every time the police arrest them, they are released again, Mzizi said.

She suspects that the group and the police are in cahoots, as nothing is ever done.

“I have no proof but actions speak louder than words. Everyone has been crying about this issue but no one has been helped,” she said.

“I told myself that this is my home, this is where my children will have peace and happiness. I didn’t pay rent, nothing. I was happy there… My heart is there,” Mzizi said.

“Honestly, I want the police to do their job, number one, to protect people. Number two, to take the cases seriously, when I open a case they must follow it.

“Last week, I went to open another case only to find out that the case I opened in June had been withdrawn from the court. The detective didn’t tell us that,” Mzizi said.

South African Police Service (SAPS) spokesperson, Captain Kay Makhubele, told News24 that he was unsure about the suspects being arrested and released.

“We will profile them and see if they were arrested before and if there are outstanding cases against them,” he said.

As to why the police did not help the family when their belongings were thrown onto the street, Makhubele said: “The police are not allocating houses. Police are enforcing the law… we don’t tell people to get into the house, or go out of the house.”