The former leader of Zimbabwe Robert Mugabe has been buried in his rural home Zvimba in a low-key private burial after the family snubbed the hilltop National Heroes Acre burial this week.

About 200 people attended the funeral service while family members witnessed the burial in a courtyard.

Hundreds of villagers were turned away from the Mugabe homestead as mourners were subjected to thorough security checks. 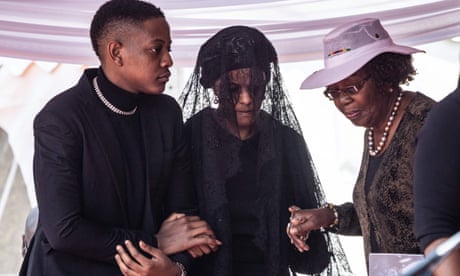 Mugabe was buried in a courtyard at the centre of the homestead. His grave is situated between two palm trees. Mourners scrambled to get into the courtyard where the 95-year-old was buried as security turned many away. A few journalists were allowed to witness the burial.

In an emotional send-off, relatives took turns to pay tribute to the former guerrilla fighter, who died on 6 September in Singapore.

The burial comes after three weeks of bickering over where his remains would be buried. The government had already begun the construction of a mausoleum at the National Heroes Acre after Mugabe was declared a national hero.

But Mugabe’s family said the late former leader had instructed his wife to bury his remains in Zvimba. The family said Mugabe had been humiliated during the November 2017 coup that ended his 37-year rule.

Family members who spoke during the final funeral service before burial said it was Mugabe’s wish to be buried at his rural home.

“I spoke to him personally as to why he would not want to be buried at the national hero’s acre, he said to me ‘I was humiliated’. I immediately stopped the discussion thereafter,” Grace’s sister Shuvai Gumbochuma said.

“I know they will say this was a decision of the wife, but what I know is that this was his wish,” said Gumbochuma who spoke on behalf of the former first lady.

“What has happened here was [Mugabe’s] wish. When we had discussions the burial issue was non-negotiable. We want to say thank you to president Emmerson Mnangagwa for respecting his wishes.”

Mnangagwa and Zanu PF stalwarts did not attend the burial ceremony.

Mugabe had been in Singapore for four months. He reportedly succumbed to cancer. Zanu PF released a statement on Saturday expressing dismay at the family’s decision to bury Mugabe at his rural home while the state was preparing a mausoleum at the hilltop National Heroes Acre.

“The revelation that former president Robert Mugabe who passed on 6 September will have a private burial at his rural home in Zvimba is most unfortunate,” the party spokesperson, Simon Khaya Moyo said.

A funeral mass was held before the burial while students from Mugabe’s former school, Kutama College, sung hymns in honour of their former patron. Another low-key send-off was held a fortnight ago when African leaders paid their last respects at the national sports stadium.