The Combined Harare Residents Association (CHRA) is deeply appalled by the militia tactics being implemented by municipal police officers in the execution of their duties. 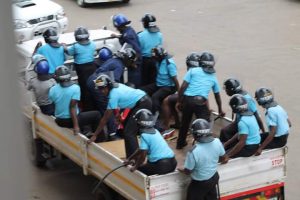 On September 4, 2019, CHRA Programmes Officer, Reuben Akili was heavily assaulted by municipal police officers for telling them that their heavy handedness on vendors was tainting the image of the council.

As if that was not enough, Akili was bundled into a council truck and was accused of stabbing a municipal police officer.

He was released after the intervention of a senior council employee.

Akili sustained injuries as a result of the assault.

This case will not go unchallenged.

We have since engaged legal experts who are working on the case and ultimately, we will seek to bring the identified culprits to book.

We will also engage council officials over the unruly behavior of municipal police officers who have turned into a militia and in the process, violating citizens’ rights in the city center.

In as much as we appreciate the role of municipal police officers, we are firmly against the use of force in the execution of their duties.

Municipal police officers have become notorious for extortion and abuse and as CHRA, we will work flat out to put this to an end.