I first met Robert Mugabe in 1978 in Maputo, Mozambique.  I had been deported from then Rhodesia the previous year after spending three weeks in detention for my work with the Catholic Commission for Justice and Peace. 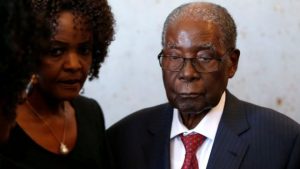 Mugabe spoke to me about the type of society he envisioned for a liberated Zimbabwe, comparing the socialism that ZANU (Zimbabwe African National Union) espoused to the life of the early Christian community described in the Acts of the Apostles.  He also promised that a ZANU government would not seize the property and institutions of the Catholic Church as FRELIMO had done in Mozambique. He assured me that the Church had nothing to fear in a liberated Zimbabwe and was grateful for the support that the guerrillas were receiving from rural Catholic missions.

I was charmed by his words as well as by his scholarly and dapper appearance. I had heard from priests in then Rhodesia that he had attended a Marist Brothers school next to his home in Kutama, about an hour outside of Harare, and had then taught in Catholic schools in Gweru Diocese before he left to teach in Ghana.

He returned to Rhodesia in the early 1960s with his wife Sally Hayfron who was from a prominent Ghanaian family and converted to marry him. She became a very devout Catholic and an active supporter of Zimbabwe’s struggle for liberation. Many feel that she was a moderating influence on her husband, giving him sound and helpful guidance and advice.

Mugabe was arrested in 1964 and spent the next ten years in prison. I learned that while there he adopted a routine of daily exercise, meditation and study that he maintained throughout his long life. He gained several degrees while in prison and gave lessons to others. I was told that he neither smoke nor drank alcohol and I saw that he was well read and interested in world issues.  He also had a keen interest in theology and scripture, assisting the priests who said Mass in the prison each day.

Mugabe’s speeches to the ZANU staff in Maputo on the anniversary of various liberation hero’s who had died were full of moral imperatives and references to scripture. He could have been a priest giving a homily to an attentive congregation. His conciliatory speech to the country after winning the elections in 1980 was in the same mold and convinced people, both within and without Zimbabwe, that he was a man who could be trusted.

I interviewed Robert Mugabe for various publications for several years before and after Independence. He always received me graciously and gave very thoughtful and thought provoking replies. After the first decade of Independence, however, I never met him again and I found it difficult to reconcile the person that I had known in Mozambique and shortly after Independence with the angry and vindictive person that I saw on the news and read about in the press. I wondered how a person who was so intelligent, who professed himself a practicing Catholic, who had promoted reconciliation between the races and championed education and health care for all could allow corruption to flourish and could sanction the violence and destruction that characterized much of his long reign in power

I used to think that he was not aware of the violence that was unleashed in Matabeleland in the few years after Independence and had not given the orders to deploy the Fifth Brigade. Subsequent accounts, however, clearly indicate that he knew and approved of the brutal tactics that were used and that would be used again in 2008 after a bruising election campaign in which the opposition won enough votes to necessitate a run-off. I chaired a human rights group at the time that provided treatment to the victims of violence and saw for myself the vicious attacks on men and women who were suspected of having voted for the opposition.

While Robert Mugabe is being declared a hero by his successor and by many regional leaders, I doubt if the majority of his own people will be so forgiving – nor will I.  A man who had raised such high hopes for peace, reconciliation and development in 1980 has instead left a legacy of violence, poverty, corruption, hunger and hopelessness.

Janice McLaughlin is a Maryknoll Sister who has worked on the African continent since 1970. She served as press secretary to the Catholic Commission for Justice and Peace in then Rhodesia for a short time before she was arrested and deported for reports she wrote about the conduct of the government security forces.
She then assisted Zimbabwean refugees in Mozambique for two years and returned to an independent Zimbabwe to help build schools for former refugees and war veterans under the Zimbabwe Foundation for Education with Production (ZIMFEP). She currently serves as communications officer for the African Forum for Catholic Social Teaching (AFCAST) based at Arrupe Jesuit University in Harare. She was President of the Maryknoll Sisters from 2009 – 2015.
Post published in: Featured