The longer dictatorships last the more paranoid they become as they resist the pressures of reality bearing ever more heavily upon them. They eventually come to the state of self-delusion shown in an article in the government mouthpiece the Herald this week under the title ‘Uncle Sam ups black ops in Zim’. 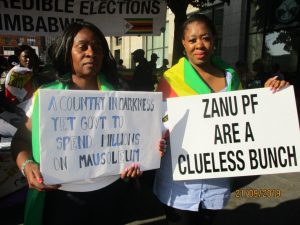 The article basically says the US Embassy was behind the kidnapping of Dr Peter Magombeyi, the president of the Zimbabwe Hospital Doctors’ Association, who it dismisses as ‘this boy’. It raves: ‘Big Brother has instituted a cocktail of black operations, from financing violent demonstrations, organising them, executing them through his CIA agents (not diplomats) housed at his expanded new embassy in Westgate, as well as through Trojan Horses in the form of the MDC and the motley host of civil society organisations.’ (See: https://www.herald.co.zw/uncle-sam-ups-black-ops-in-zim/).

To objective observers, Zimbabwe is in a catastrophic meltdown with inflation racing beyond 800%, massive unemployment, shortages of fuel. power, water, food, medical supplies – everything except luxuries for the elite.

To the leaders of Zanu PF, who believe they ‘own’ the country, any complaints about the situation are treasonous because the problems have been caused by ‘illegal’ sanctions (and now climate change caused by the West).

This was the argument of the Mugabe regime which proved so successful that it has been adopted wholesale by his totally unimaginative successor Mnangagwa and has indeed become the lifeblood of Zanu PF: ‘do what we have done that has worked before’.

Apart from rigged elections (taken for granted), abductions have always been a feature. Jonathan Moyo, Zanu PF insider, now in exile, says a group called Ferret made up of security agents under the control the shadowy Joint Operations Command was responsible for Magombeyi’s abduction.

The Herald doesn’t say why the US should take such a close interest in Zimbabwe, a country of no particular importance. Could it be that it wishes to help the suffering people or stop it from collapsing into the oppressive arms of China?

FOR THE RECORD: 40 signed the register.