HARARE, Zimbabwe (AP) — A Zimbabwean judge on Tuesday ordered police to allow a doctor recuperating after an alleged abduction to seek medical treatment outside the troubled country, but police later blocked him from leaving and scuffled with his lawyers. 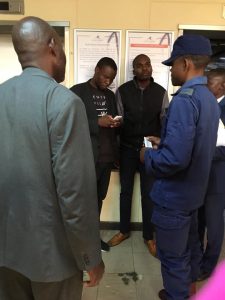 The leader of the Zimbabwe Hospital Doctors Association, Dr. Peter Magombeyi, was freed last week after disappearing for several days. His alleged abduction after leading a pay strike led to days of protests by health workers and expressions of concern by diplomats and others.

More than 50 government critics in Zimbabwe have been abducted this year alone, Human Rights Watch and others have said, while the government has warned against what it calls “fake” abductions it asserts are meant to make it look bad.

Magombeyi since his release has been in a private hospital, and his lawyers had accused police of camping outside and refusing him permission to leave for neighboring South Africa for urgent specialist treatment.

High Court Judge Happias Zhou ruled that Magombeyi is entitled to travel outside the country for treatment as he is not under arrest.

“The actions of the police are in violation of his right to liberty and freedom of movement. He has a right to access health services anywhere he wants,” said Jeremiah Bamu, one of the doctor’s lawyers.

But hours later, police surrounded the hospital and blocked him from leaving, scuffling with lawyers.

“As you can see, police are denying him right of passage,” said lawyer Rose Hanzi. “They are violating a court order.”

A police spokesman could not immediately be reached for comment.

Zimbabwe’s health sector, like its economy, is in crisis. Many services are unavailable due to collapsed infrastructure, lack of medicines or unavailability of doctors and nurses who say they can no longer afford transport to report for work.