In the beginning, it was the borehole that broke down. Then finding no other alternative for water, 66-year old Jimson Matavire in southern Zimbabwe turned to the only available well before it dried up just two months ago. 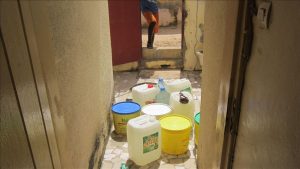 Now stranded with no access to water, Matavire, who is one of the village heads in Mwenezi rural district, said the entire Dinhe village has to scrounge for water from muddy water bodies, which have also not been spared by the marauding drought in the country.

“There is no more water in the village now, as many boreholes have broken down and wells are also drying up and we’re literally drinking dirty muddy water,” Matavire told Anadolu Agency.

Water woes have not only affected the Mwenezi district alone, but the entire country.

Earlier this month, the UN World Food Program (WFP) said about 2.3 million people in rural Zimbabwe were facing starvation due to an El-Nino induced drought and economic shocks.

Seeing this danger facing the country, the WFP increased its aid appeal for Zimbabwe to $331 million to help the southern African country recover from a devastating drought.

Besides contending with hunger, villagers like Matavire also have to bear the brunt of water scarcity.

In Maranda in the Mwenezi district, many other villagers like 29-year-old Sibusisiwe Mangari have to walk several kilometers to access the precious liquid.

“I have to carry a 20-liter container every day, walking 7 kilometers [4.3 miles] to find water in wells along the Mushawi River in the early morning hours,” Mangari told Anadolu Agency.

As the water crisis hit rural dwellers like Mangari, waterborne illnesses affected the country’s less privileged residents, as they depend on unsafe water sources.

A nurse at the Chirindi clinic in district’s Mazetese area said they have been attending to several cases related to waterborne diseases.

“We have since realized that villagers drinking water from contaminated water bodies are thereby falling sick, some from stomach pains resulting from unclean water,” said the nurse, who asked not to be named due to restrictions on speaking to the media.

According to humanitarian groups — including Human Rights Watch — over a decade after a cholera outbreak killed more than 4,000 people in Zimbabwe, the nationwide water crisis is risking conditions under which the epidemic could return.

Health officials have also voiced their concerns as rural dwellers bear the brunt of water woes in the country.

With villagers resorting to drinking dirty water from drying-up wells, civil society activists say the growing crisis is one that authorities seem to have long ignored.

“In many communities, both rural and urban, there is no water for drinking or bathing; sewage stains the streets, and there is diarrhea, typhoid, and threat of a cholera outbreak,” Claris Madhuku, director of the Platform for Youth Development, a civil society group in Zimbabwe, told Anadolu Agency.

Until the late 1980s, Zimbabwe boasted of having a nationwide functioning water system, with access to drinking water for 85% of the population.

But over the years, rural community boreholes and even the urban water-piped infrastructure have not been maintained.

“Authorities haven’t bothered to take into consideration the population growth in both the country’s remote and urban areas, which has added pressure to the few remaining water resources,” Gilbert Mhandu, a teacher based in the district, told Anadolu Agency.

According to Human Rights Watch, the government of Zimbabwe is obliged under international law to protect the right to water and sanitation.

In 2010, the country voted for a United Nations General Assembly resolution establishing the right to water and sanitation.