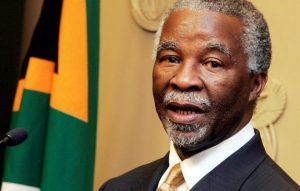 He was speaking at a memorial for Mugabe that was held by the ANC in KwaZulu-Natal in a packed Durban City Hall.

Mbeki lashed out at Western countries, saying the UK and US, in particular, were adamant that Mugabe should be removed from public office

“That is why many people of the world didn’t want him. For us, he was a fellow combatant and a leader who would never ever abandon our struggle for liberation.”

Mbeki said when he was president, former UK prime minister Tony Blair contacted South Africa and proposed that Mugabe not run for president.

Blair calls for Mugabe to be removed

He said Blair and other countries said that if Mugabe continued to stay in power, it had to be for a maximum of six months.

“We had a lot of interaction with them. In the end the British government under Tony Blair said it was ready to use force to remove Robert Mugabe. I’ve said this before, and Tony Blair said I was not telling the truth.”

Mbeki said a security adviser had publicly stated that Blair’s administration often discussed removing Mugabe, but that in the end, southern African countries did not support the move.

“Blair said he did not get rid of Mugabe because it wasn’t practical since surrounding African countries showed lingering support for him and would have opposed any action… And indeed, we opposed it strenuously, because we are saying, the Zimbabwean people have a right to determine their own destiny.”

Mbeki added to a round of applause: “There is nobody who is going to come from London and decide for Zimbabweans on how they should govern.”

He said this proved the vigour and strength Mugabe had for African independence.

“In the end, the reason we had people from so far away planning to overthrow an elected leader of Zimbabwe was because this was a tried and tested African patriot. He stood very firm for the liberation of the continent. He was a great actor in the interest of the countries of the south.”