HARARE  – A UN human rights experts has called on Zimbabwe to embrace and safeguard democracy, saying that the country’s change in leadership provided an opportunity to promote political tolerance, accountability and bring an end to impunity for human rights violations. 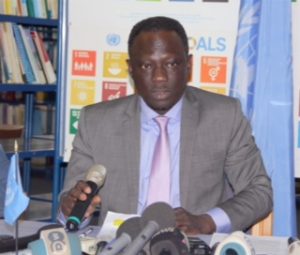 Clément Nyaletsossi Voule, the Special Rapporteur on the rights to freedom of peaceful assembly and association, concluded a 10-day official visit to Zimbabwe on Friday, the first such mission to the country by an independent expert appointed by the Human Rights Council. He went to Zimbabwe at the invitation of the Government.

“The change in leadership in Zimbabwe two years ago and its promised ‘new dispensation’ – which reaffirms the aspiration to bring the country forward in terms of democratic processes, civic space and the realisation of human rights for all – must be put into action now,” Voule said in a statement.

The expert expressed his support for the Government’s stated commitment to democratisation, urging the authorities to go further in translating their vision into action.

“The Government has the unenviable challenge to resolve a profound and complex economic, political and social crisis in the country. To succeed it will need the support of the international community,” Voule said. “My role is to encourage the authorities that genuine dialogue with the political class and the population, including protest movements, is the only way forward to resolve such a crisis.”

The expert expressed concern over the excessive use of force by police and military during protests, stating that it had a profoundly negative impact on the minds of the population. He said that military forces should only be deployed in exceptional circumstances, but that, in fact, the practice was beginning to become commonplace.

“In cases where there have been human rights violations committed by police or the military, including in instances of the excessive use of force, it is vital that perpetrators are held accountable,” Voule said. “To foster impunity is to foster distrust among the population, alienating them from the Government, and quashing their hopes of meaningful change in the future.”

The expert applauded the creation of the Motlanthe Commission which was tasked to bring truth and accountability for human rights violations which occurred in the midst of electoral violence last year. He urged the Government to implement recommendations from the commission’s report which was delivered in December 2018.

Voule also expressed concerns about restrictions affecting the work of NGOs. “I am worried to have heard of cases of intimidation against NGOs and human rights defenders, which isolates and stifles the space in which they may be able to make their voices heard,” he said.

“In addition, I have heard reports, which I have raised with the Government, of trade union members being targeted for their involvement in calling for strikes and protests. I urge the Government to examine these concerns and create an enabling environment for NGOs, defenders, trade union members, community leaders and the like to continue their activism. Their work is vital to secure democracy, rule of law and sustainable development in the country as aimed by the ‘new dispensation’”.

The Special Rapporteur engaged with communities in Bulawayo, Hwange, Arda Transau, Mutare and Marange and expressed concerns regarding the difficult environment in which they were operating, including acts of intimidation.

The Special Rapporteur’s final conclusions and recommendations will be presented in a report to the Human Rights Council in June next year.