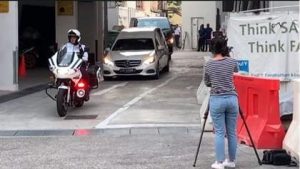 The body of Zimbabwe’s former president Robert Mugabe was flown home from Singapore on Wednesday morning, five days after he died in a hospital in the wealthy city-state. Police motorbikes escorted the white Mercedes hearse carrying Mugabe’s body from Singapore Casket, a funeral parlour where he had been kept since his death.

“It just left now,” he said by phone from the plane as it took off, with the noise of the aircraft audible in the background.

The delegation from Zimbabwe arrived on Tuesday and attended a private Catholic mass for Mugabe at the funeral parlour, which was officiated by a Zimbabwean priest.

Mugabe’s body was expected to arrive in Zimbabwe on Wednesday at 3pm (13:00 GMT), a family member told Reuters. From there, it will be taken to his home village in Kutama, west of the capital Harare, where he has been mourned as a hero and where there will be an overnight wake.

The former guerrilla leader had dominated Zimbabwean politics for almost four decades from independence in 1980 until he was removed by his own army in a November 2017 coup.Revered by many as a liberator who freed his people from white minority rule, Mugabe was vilified by others for ruthlessly crushing his opponents and wrecking one of Africa’s most promising economies.On Thursday and Friday, Mugabe’s body will lie in state at Rufaro Stadium in the capital so the public can pay their respects.

The 35 000-seater stadium is where Mugabe took his oath of office when Ian Smith, the Prime Minister under the colonial Rhodesian regime, handed over power.

There Mugabe hoisted the new Zimbabwe flag and lit the independence flame on April 18, 1980 – bringing hope for a new era after a long guerrilla war.

The official funeral will be held on Saturday at the 60 000-seat National Sports Stadium in Harare and foreign leaders are expected to attend.

He will be buried on Sunday but the location remains unclear.

Mugabe’s family is resisting the government’s plan to bury him at the National Heroes Acre monument in the Harare and wants him to be interred in his home village, relatives have told Reuters.