HARARE, Zimbabwe (AP) — The immigration officer lifted his stamp to put the visa into my passport and I heaved a sigh of relief. But then my passport was taken by a smiling woman who asked, “Have you been to Zimbabwe before?” 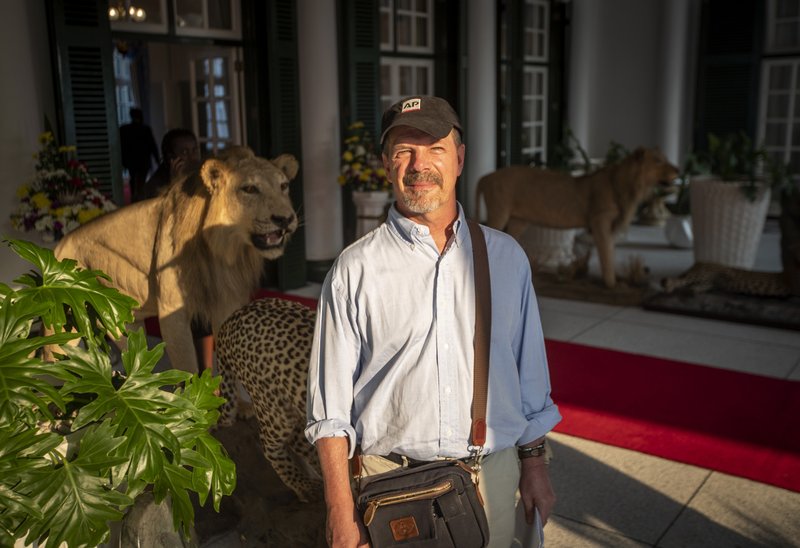 In this photo taken Sept. 13, 2019, Associated Press journalist Andrew Meldrum poses for a photograph at the entrance to State House in the capital Harare, Zimbabwe. After 16 years in journalistic exile, Meldrum returned to Zimbabwe, the country where he worked as a journalist for 23 years until he was expelled by former president Robert Mugabe’s government. For the past week he reported on the mourning period for Mugabe. (AP Photo/Ben Curtis)

HARARE, Zimbabwe (AP) — The immigration officer lifted his stamp to put the visa into my passport and I heaved a sigh of relief. But then my passport was taken by a smiling woman who asked, “Have you been to Zimbabwe before?”

Through questioning she determined that I had worked as a journalist in the country from 1980 to 2003.

“Was your departure from Zimbabwe voluntary or involuntary?” she asked. I answered truthfully: It was involuntary as I had been expelled by the government.

“Please come with me to answer a few questions,” she said, leading me to a small room.

I knew that room well, as I had been detained there 16 years ago. That was after I was dragged from a news conference, slapped by a police officer, put in a car with a hood over my head and held in the airport basement for several hours.

This time I was questioned by the young woman and two other agents. They interrogated me about why I had been jailed, put on trial and acquitted but then forcibly ejected from Zimbabwe. Had my reporting been biased? I said that I had reported objectively and that I had been the last foreign correspondent based in Zimbabwe to be thrown out of the country. I told them I was returning to cover the burial of former president Robert Mugabe.

“It’s an historic event. Robert Mugabe ruled Zimbabwe for 37 years and had a huge influence on Zimbabwe and across Africa. I want to chronicle this final chapter of his life,” I told them.

“The international sanctions against Zimbabwe, why haven’t they been lifted?” I was asked, prompting a discussion about the economic penalties that were imposed during Mugabe’s rule and have been maintained.

Then came their verdict.

“Welcome back to Zimbabwe!” said one of the agents, telling me I would be admitted — and adding that they would be watching my work.

I walked outside and felt Zimbabwe’s unmistakable cool, consoling evening air. I was back. After 16 years in journalistic exile, I had returned to the country that had been my home and the core of my career. It felt surreal. 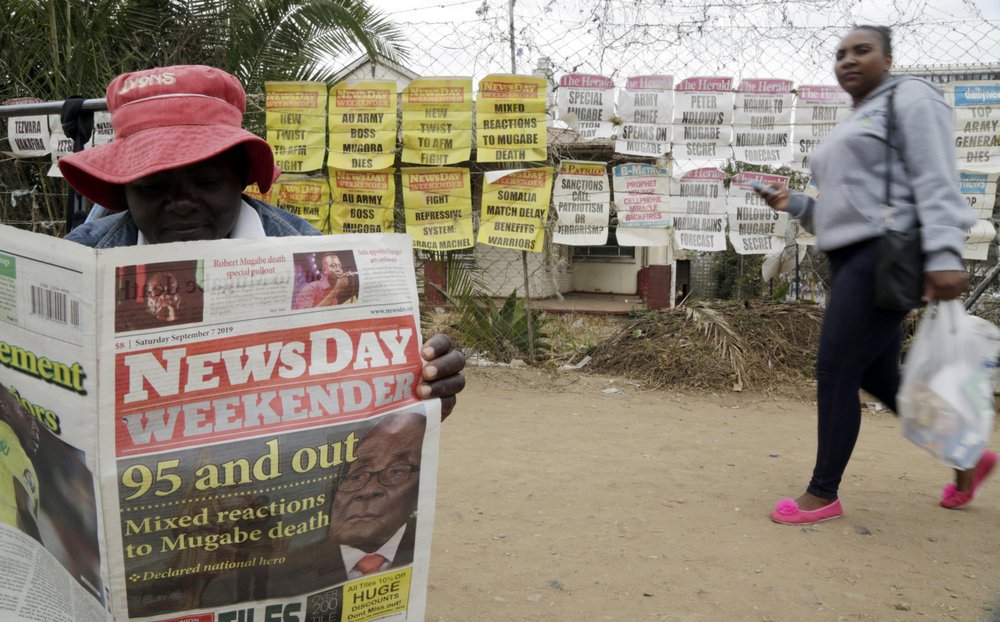 An ice-cream vendor reads a newspaper reporting on the death of former Zimbabwean president Robert Mugabe on a street in Harare, Zimbabwe. (AP Photo/Themba Hadebe, File)

For the past week I’ve been on the beat, covering the mourning period for Mugabe, the viewings of his body, the state funeral attended by several African leaders, and the dramatic tug-of-war between widow Grace Mugabe and President Emmerson Mnangagwa over where, when and how Mugabe would be buried. I’ve interviewed Zimbabwean officials, academics and analysts and, best of all, Zimbabweans of all walks of life. One of Mugabe’s best legacies is a well-educated population that is the envy of Africa and the pointed, perceptive and often funny quotes from everyday citizens can liven up any story.

One of Mugabe’s worst legacies is repression and human rights abuses. Government critics and opposition leaders faced abductions, torture and sometimes death. The abduction last week of the leader of a doctors’ association who had criticized the government for the deterioration in Zimbabwe’s health care system is a reminder that this abuse is continuing. It was the latest in a string of such abductions by suspected government agents.

It’s hard to remember that Zimbabwe, at its independence in 1980, captured the world’s attention as a country of positive achievements and promise. It had gone from a bitter, bloody war against white minority Rhodesian rule, to majority-ruled Zimbabwe. Guerrilla leader Mugabe won elections, espoused racial reconciliation and was nominated for a Nobel Peace Prize. Minimum wages increased, school enrollment quadrupled, health clinics sprang up and people’s lives improved dramatically. Zimbabwe’s success was a pointed challenge to neighboring apartheid-ruled South Africa.

That is the country that I had come to report on in 1980. It was exciting to write about Zimbabwe’s development and the country’s role in the struggle against apartheid.

But soon I found myself uncovering and writing about the government’s brutal campaign in the southern Matabeleland provinces, a center of opposition to Mugabe, during which an estimated 10,000 to 20,000 Ndebeles, Zimbabwe’s minority ethnic group, were killed. Mugabe gave fiery speeches attacking the West and urging sanctions against South Africa. He publicly condemned gays, saying they had no legal rights. In 2000 he ordered the seizure of white-owned farms, which was often violent. When Mugabe was challenged by an opposition party that sprang from the trade union movement, his militia reacted viciously and some 300 members of the new party were killed.

The abuses were harrowing and in reporting them for the British newspaper The Guardian, I was getting these accounts out to the world, especially of the brave people insisting on good governance and respect for human rights at great cost to their own safety. The government began restricting the foreign press and several of my colleagues were kicked out of the country. Then in May 2002 I was arrested and spent a night in jail. I was charged with publishing a falsehood, a criminal offense carrying a two-year jail term. After a grueling two-month trial, I was acquitted. But 10 months later state agents abducted me and forcibly expelled me from the country. 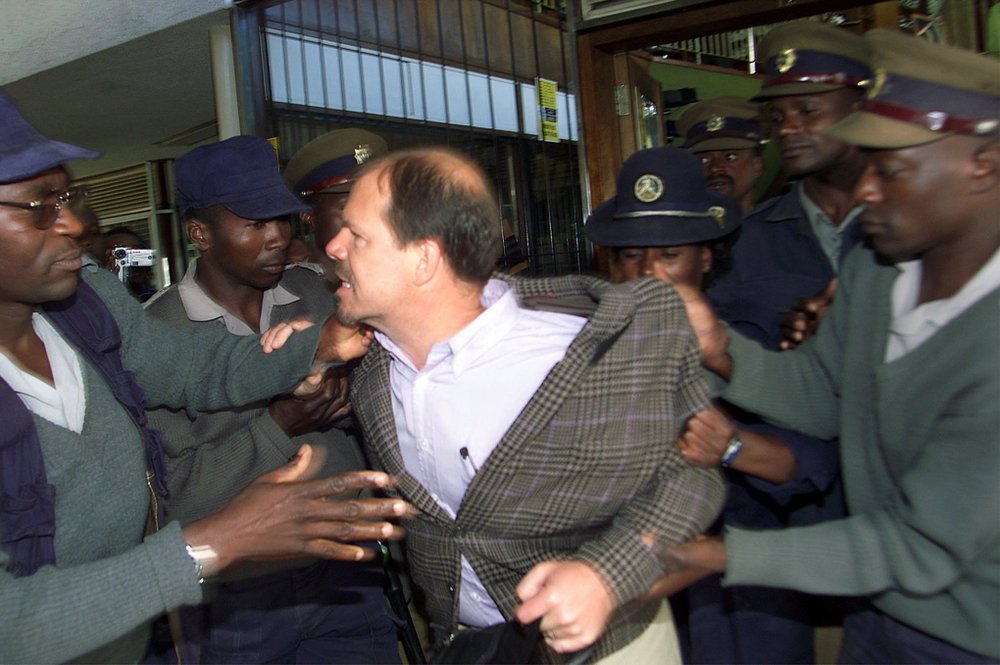 In this May 16, 2003, file photo, journalist Andrew Meldrum is manhandled by police and pushed into a car after being issued with a “prohibited immigrant” order by immigration officials at their offices in Harare, Zimbabwe. (AP Photo/File)

Mugabe loomed large throughout all of this, so it seemed fitting to return to report on his funeral.

Immediately upon my arrival, I felt back at home. At Rufaro Stadium, in the capital’s poor Mbare suburb, Mugabe’s partially open casket was put on view. I had always liked going there for concerts featuring musicians like Oliver Mutukudzi and Paul Simon’s “Graceland” tour with Hugh Masekela and Miriam Makeba. The stadium was also where Mugabe had given many incendiary speeches.

And now here was his casket. I got in the fast-moving line to view the body and soon found myself peering at it, eyes closed in repose, small and not angry.

As I walked away a microphone was thrust in my face. “Andrew Meldrum, you have viewed Robert Mugabe, what do you think of his passing?” It was a well-known reporter from the state broadcaster. I said it was an historic occasion that I was pleased to be able to chronicle. 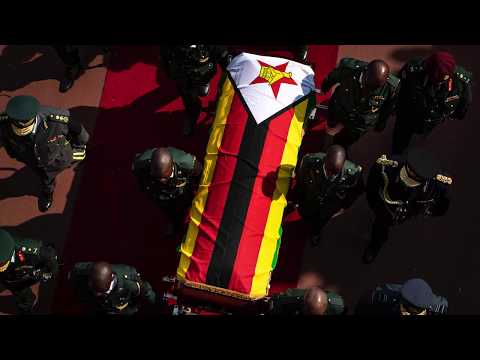 Throughout a tumultuous week of reporting, I have noted the changes to Zimbabwe since my departure 16 years ago. Downtown Harare looks a bit run down but still orderly amid its bustle. It is in the outlying working-class suburbs where conditions have plummeted. The roads have deteriorated badly, power cuts are up to 19 hours per day and water comes on just once a week. By day people line up at wells to pump water for drinking, washing and cooking; at night these areas are dark. I used to go to friends’ homes for meals in these neighborhoods. Now few can afford such hospitality.

It is when I am outdoors, taking in Zimbabwe’s unique sub-tropical climate, that I feel most at ease. The cycads and palm trees, the brilliantly colored bougainvillea, the jacaranda trees that have been coming into their purple bloom while I am here are more notable to me than shabby buildings that need a coat of paint. When I heard the distinctive “tuk, tuk, tuk” call of the purple-crested turaco, I was immediately taken back in time to when I lived here.

Zimbabwe’s challenges and problems are more pressing than ever, which makes it even more satisfying to be reporting on the people struggling to get by and insisting on better living conditions. Even if it is only for a short time, it feels good and natural to be back.

At the airport, when I was questioned before my entry, the official asked me: “What is your mindset on coming back to Zimbabwe? Are you bitter?”

“No,” I said, smiling. “I’m not a bitter man. Returning to Zimbabwe and reporting on its challenges is gratifying.”

Andrew Meldrum is the Africa News Editor for The Associated Press and is based in Johannesburg, South Africa. He has reported on southern Africa for 34 years, including 23 years in Zimbabwe.