JOHANNESBURG (Reuters) - Zimbabwe scored two last-gasp goals to edge past Somalia and avoid a humiliating exit in World Cup qualification as the last of the African group phase places were decided on Tuesday. 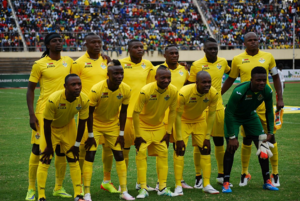 A deflected Admiral Muskwe header in the 86th minute and a stoppage time goal from Khama Billiat saw Zimbabwe to a 3-1 home win over Somalia to take the tie by the odd goal in five on aggregate and advance to the second round of the qualifiers.

They are joined by Angola, Djibouti, Guinea Bissau, Malawi, Mozambique, Namibia, Rwanda, Sudan and Togo, who all won their ties on Tuesday to move into the 40-team, 10-group second round of preliminaries for the 2022 finals in Qatar.

Zimbabwe had suffered an embarrassing 1-0 defeat by the Somalis in the first leg last Thursday — a first ever World Cup qualifying win for the strife-torn country — and on the weekend added several of their South African-based professionals to the squad after severe criticism from local media.

But they were within five minutes of further humiliation in Harare when a terrible defensive error allowed Omar Abdullahi Mohamed to make the score 1-1 after Zimbabwe had gone ahead in the 77th minute through Marshall Munetsi.

The away goal for Somalia meant Zimbabwe needed to score twice in the last five minutes and they did exactly that through substitute Muskwe’s deflected header and a powerful strike from Billiat to win in dramatic fashion.

It was a heartbreaking exit for Somalia, whose new-look side drew players for the first time from immigrant communities in Europe and the U.S.

But neighbours Djibouti are through after a 0-0 draw in Eswatini ensured an unexpected 2-1 aggregate victory in the only upset of the day.

Meddy Kagere and Jacques Tuyisenge both scored twice as Rwanda thrashed the Seychelles 7-0 for a 10-0 aggregate victory, while 2006 finalists Angola beat the Gambia 2-1 for a 3-1 aggregate win.

Togo, who also went to the World Cup in Germany 13 years ago, won 2-0 at home against the Comoros Islands to also advance 3-1 on aggregate.

The 14 winners of the first round ties now join the 26 top-ranked African countries in the group phase.

FIFA have not yet set a date for the draw for the group phase, officials told Reuters on Tuesday.