A complex character who ruthlessly pursued his goals, Mugabe leaves a mixed legacy: an independence leader who built his country up, then helped destroy it

A complex character who ruthlessly pursued his goals, Mugabe leaves a mixed legacy: an independence leader who built his country up, then helped destroy it

One is the mystery of how a giant of Africa’s liberation movement, an intellectual who preached racial reconciliation long before Nelson Mandela emerged from prison, could turn into a caricature of despotism.

Another is what kind of future he would bequeath Zimbabwe, a beautiful yet benighted country that he ruled for almost all of the nearly four decades that have passed since it won independence from the British.

The third was the nature of his passing: would he die or be deposed? 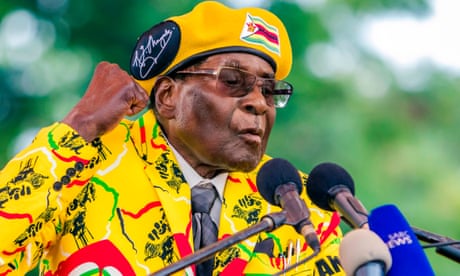 We got the answer to the last one in November 2017, when Mugabe was ousted in a military coup in everything but name then ruthlessly sacked by his own party. Reluctantly, bewildered and shaken, the ailing president stood down. His last weeks in power had been dominated by a power struggle between his wife, Grace, and the former vice-president Emmerson Mnangagwa, a long-serving veteran of Zimbabwe’s 1970s liberation wars who had always been viewed as a likely successor. The news of Mugabe’s departure was greeted with rejoicing across the nation.

For the other two questions there are clues, but no easy answers, to the making of this dictator.

He was abandoned by his father as a boy; he suffered the deaths of a three-year-old son and a compassionate wife; then there was his warped fascination with Britain.

Mugabe was awarded an honorary knighthood by the Queen then stripped of the honour, an insult he never forgave. The former colonial power shaped his dress code, manners and vision to the end. “Cricket civilises people and creates good gentlemen. I want everyone to play cricket in Zimbabwe,” he once said. “I want ours to be a nation of gentlemen.”

Zimbabwe is a nation whose gentleness and articulacy seem at odds with the catalogue of torture and thuggery; a fertile land with the best climate in the world brought to the edge of ruin.

Mugabe created Zanu-PF, the ruling party, in his own image, and sought to do the same with Zimbabwe. He rose with quiet determination and ruthlessness.

Raised a Catholic and educated at missionary schools, he moved to Fort Hare University in South Africa for the first of his seven degrees and became a teacher in Ghana.

When he returned to the then Rhodesia in 1960, his political activism earned him a 10-year prison term for “subversive speech”, after which he fled to neighbouring Mozambique to lead the guerrilla forces of the Zimbabwe African National Union (Zanu) – which had split from Joshua Nkomo’s Zimbabwe African People’s Union (Zapu) – in a protracted war against Ian Smith’s government that left 27,000 dead.

The 1979 Lancaster House agreement in London brought independence to Zimbabwe and Mugabe returned home a hero.

He announced a policy of reconciliation and invited whites to help rebuild the country.

He initially ran a coalition government with Nkomo, his fellow freedom fighter, but the pair fell out.

Then came the biggest counter-argument to the notion that Mugabe was a good man slowly corrupted by power: Gukurahundi, or “the rain that washes away the chaff before the spring rains”.

As early as 1982 his North Korean-trained Fifth Brigade crushed an armed rebellion by fighters loyal to Nkomo in the province of Matabeleland. His rival’s party, Zapu, was ethnically largely Ndebele, while Zanu was predominantly Shona. This divide underlay the vicious ethnic cleansing that ensued in the mid-80s, when at least 20,000 people died in Matabeleland, a series of massacres classified as genocide by the US-based Genocide Watch.

Few in the west noticed, or wanted to. They preferred to see an economy that was growing as agriculture boomed and Mugabe built clinics and schools, turning Zimbabwe into one of the healthiest, best-educated and most hopeful countries in Africa.

The optimism began to sour in 1997, when Mugabe gave in to pressure from war veterans waging violent protests for pensions. Trade unions and political activists began organising what would become the first viable political threat to Mugabe, the Movement for Democratic Change (MDC). But it was partly bankrolled by white farmers, which allowed Mugabe to whip up militancy against it.

In 2000 Mugabe began a land reform programme, billed as an attempt to correct the unresolved colonialist legacy by giving white-owned farms to landless black people. Many saw it as a crude attempt to sideline the MDC, which commanded wide support among farm workers.

White farmers were forcibly evicted by self-styled war veterans, many too young ever to have fought in the liberation war, and their properties handed to Zanu-PF cronies or black Zimbabweans who lacked the skills and capital to farm.

The ensuing chaos undermined the economy, which shrank to half the size it had been in 1980. The one-time “breadbasket of Africa” became dependent on foreign aid to feed its masses. Hyperinflation turned the national currency into a standing joke – a hamburger cost 15m Zimbabwe dollars – and it had to be abolished as the US dollar became the de facto currency.

Schools and hospitals fell apart, once-eradicated diseases returned and life expectancy crashed from 61 to 45. Millions of people moved to neighbouring South Africa and other countries, a monumental flight of intellectual capital.

The political environment also became hostile, with activists and journalists persecuted, jailed or murdered. The MDC claims that 253 people died in political violence in the 2008 election. The party’s leader, Morgan Tsvangirai, widely seen as the vote’s real winner, was forced to join Mugabe in an uneasy power-sharing agreement.

“He started very well but ended up disgraced because he eroded his own legacy by collapsing a once-vibrant economy, by violence, by appearing to tendencies of dictatorship and one-man rule,” Tsvangirai told the Guardian in a 2011 interview. “That’s what his record will reveal.”

Mugabe could not bear to relinquish power even when the democratic current turned against him two decades ago, he added. “I think the turning point of Mugabe was when he lost the support of the people, when it dawned on him the people no longer supported him. Then he became reactionary. He reacted to the people’s will by enforcing his will on the people. That was around the late 90s.”

Quite when, and why, Mugabe “moved from a hero to a villain” will be debated for many years to come. Denis Norman, a white farmer who became his agriculture minister from 1980 to 1985, said: “He was such a complex character who was very difficult to fully understand and analyse. He was a very intelligent man who ruthlessly pursued his goals and ambitions, which during his rise to power must have injured many who were also competing for top positions.

“I have always maintained that his driving force was the desire to control and remain in power, and once achieved to remain in that position. I am well aware of the allegations of corruption that have surrounded him, but without any evidence as opposed to rumours, I don’t believe that the creation of wealth was ever his motive; the same cannot be said for many of those who surround him.

“The softer side of his nature was rarely if ever seen, but it certainly used to exist, along with a warm sense of humour, but I believe he guarded both very carefully in case they are interpreted as a sign of weakness.”

Norman added: “I don’t think history will judge him favourably. He will be remembered for all the events that have taken place during his latter period in power: the land invasions, the rigged elections, the beatings in the townships and the ineptitude of the courts.”

Another insight is offered by Simba Makoni, who toured Europe with Mugabe in the late 1970s and served in his government. “I know of two Mugabes: the early Mugabe and the later Mugabe.

He said the status Mugabe “deserves of a national hero on the basis of his role in the liberation of the country” was “totally wiped out” by his conduct after.

Makoni, a former finance minister, identifies three factors which led to the change in the leader’s character: the accord with Nkomo that in effect destroyed any meaningful opposition – “it removed the only alternative to Mugabe so he had no reason to look over his shoulder”; his switch from prime minister to president in 1987; and the death of his Ghanaian-born first wife Sally in 1992.

All of these happened after the Gukurahundi massacres. Makoni conceded: “I accept yes, you won’t find a rational explanation why a caring, compassionate leader would allow 20,000-30,000 of his citizens to be annihilated under the auspices of Gukurahundi. That notwithstanding, I would say the greater part of Mugabe would come through as a caring, compassionate, committed leader who wanted the best for his people – with the deviation or the aberration of Gukurahundi.”

Many of those who knew him describe an inner conflict between Mugabe the African nationalist and Mugabe the child of British colonialism.

Heidi Holland, who interviewed him for her book Dinner with Mugabe, described him as having tears in his eyes when discussing the royal family. Tendai Biti, another former finance minister, called him “a British gentleman in a proper Victorian sense”.

Makoni, who quit Zanu-PF to lead his own party, Mavambo Kusile Dawn, after a failed attempt to defeat Mugabe, said: “I would say Britain is a passion, not an obsession. He loves the place and its character, its mannerisms.

Mugabe was stripped of his honorary knighthood in 2008 and subjected to targeted sanctions that prevented him travelling to Britain and other countries. He could no longer shop on Savile Row for his beloved suits and descended into what Tsvangirai describes as an “anti-British paranoia”. As the years wore on, he became increasingly bellicose in denouncing Britain while repeating the mantra: “Zimbabwe will never be a colony again.”

Makoni said: “All this vituperation, my reading of it, is like grapes are sour. My sense is all the anger about the illegal sanctions and all that … the fact that he hasn’t been able to go to London, I think it irked him a lot.”

There is one man who will forever cast a shadow across Mugabe.

Nelson Mandela’s life and career paralleled Mugabe’s in many ways until the South African president relinquished power after one five-year term. Mandela is revered as the greatest statesman Africa has produced; Mugabe, who clung on to power beyond his time, is seen as its fallen angel.

Allister Sparks, the late South African journalist, recalled a conversation with Mandela: “We got to talking about Mugabe, whom he really profoundly disliked, and I think it was reciprocated. He said, ‘You know Allister, the trouble with Mugabe is that he was the star – and then the sun came up.’”