The Zimbabwe Human Rights NGO Forum (the Forum) launched the 2018 State of Human Rights Report in Harare at Alliance Françoise at an event attended by media practitioners, civil society colleagues, development partners, academics, students and members of the development community among others. 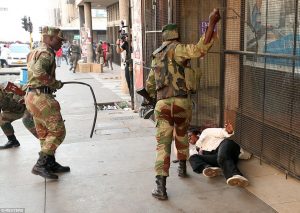 Dedicated to the 6 civilians who were killed by the Zimbabwe National Army (ZNA) on 1 August 2018, the report is the most comprehensive appraisal of Zimbabwe’s human rights situation produced every year by Zimbabwe’s biggest and oldest human rights coalition, the Zimbabwe Human Rights NGO Forum (the Forum).

In the Foreword to the report, the Chairperson of the Forum Jestina Mukoko notes that 72% of the human rights violations documented do not require money to resolve.  “They only require the state to turn off its architecture of violence and torture,” she says, “Surely, this is not asking for much.”

15 Chapters of the report are dedicated to an assessment of the human rights situation along thematic areas that include elections, governance, economy, socio-economic rights, civil and political rights, children’s rights, women’s rights, sexual minorities, persons with disabilities, environmental rights, business and human rights, freedom of the media, courts and access to justice, independent commissions, and ratification of international treaties. The final chapter of the report makes a raft of recommendations for state and non-state actors.

Key among the recommendations is the call for an inclusive and comprehensive national dialogue to create a culture of respect for human rights and restore the dignity of all persons. The report recommends greater compliance with the constitution, genuine and authentic reform of repressive laws, respect and strengthening of independent commissions, reform of the security sector as well as fair and impartial application of the law.

Speaking at the launch of the report, Ms. Blessing Gorejena, the Executive Director of the Forum noted that she hoped that the report will help in escalating the conversation on the nation’s human rights priorities.  In presenting the findings of the report, the Forum’s Programmes Coordinator, Dzikamai Bere said that the motivations for observance of high human rights standards should not be to please any foreign governments, but that rather for the benefit and dignity of the people of Zimbabwe.

Officially launching the report, Mr. Tabani Moyo of the Media Institute for Southern Africa (MISA) stated that the report is not about the past but the future.

“This is not just a report of the past,” said Mr. Moyo, “but a projection of what our future will look like and what work we need to put in to ensure that we build a society in which all people will enjoy their rights.”