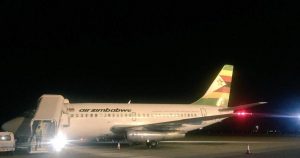 It said the airline owes it an undisclosed amount of money.

Acsa, however, said it would not disclose the amount owed by the airline.

“The company informed Air Zimbabwe by letter on 18 October that it will not be allowed to depart from any of Airports Company South Africa’s nine airports and that the prohibition will remain in place until outstanding amounts are settled,” Acsa said in a statement.

“The suspension of an airline takes place only after considerable engagement with an airline’s management.”