A protest vigil outside the Zimbabwe Embassy, 429 Strand, London every Saturday from 14.00 - 18.00 since October 2002. The Vigil will continue until internationally - monitored, free and fair elections are held in Zimbabwe. 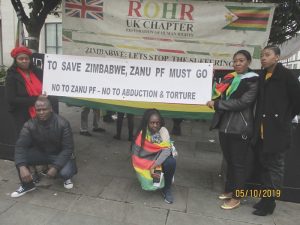 The MDC says that the African Union must take action before the situation in Zimbabwe spirals out of control. It urges the organisation to exercise the UN recognised ‘right to protect’.

The party’s deputy spokesman Luke Tamborinyoka said the situation provided a test for Africa. ‘Our brothers and sisters on the continent cannot just watch while citizens are brutalised and harassed by their own government when they have adequate legal safeguards to take action.’

In a letter to the African Union, the MDC says that, under the AU’s own constitution, it has the right to intervene in a member state in grave circumstances.

‘Grave circumstances are an apt summation of the situation in Zimbabwe. It is our humble submission that there are crimes against humanity being committed by the State in Zimbabwe, given the abduction of innocent citizens, the proscription of the right to demonstrate and the callous murder by State security agents of over 20 citizens on August 1, 2018 and in January 2019,’ the MDC said.

For his part, a US spokesman has repeated American concerns over the Zimbabwe situation. He said: ‘We have great concerns over the space that’s available for democracy and governance in Zimbabwe. We have been alarmed at how the government has treated its own citizens.’

If, as suggested, Zimbabwean bank notes are introduced next month they will soon show the real rate of inflation. The Vigil remembers that its barely a decade ago when wheelbarrows were used to go shopping – not to bring back goods but to carry the bank notes. The wizards at the finance ministry and the reserve bank must explain how you can import if you don’t export, except with the money we in the diaspora send home or foreign aid and loans.

Among those feeling the pinch is former Vice President Phelekezela Mphoko who has gone to the High Court seeking payment of his pension. Mphoko, who was in office for three years until last year, said that so far he hadn’t received a cent in pension and was now owed US$308,000. We hope he doesn’t get a bean because some time ago one of our activists said he was a family friend but had raped her.