There apparently being nothing pressing to do at home, comrade Mnangagwa splashed out $30,000 an hour on hiring a plane from Dubai to fly him and his delegation to a conference in France. 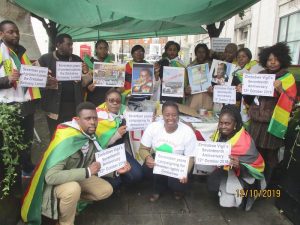 He is reported to have been accompanied by the fuel tycoon Kudakwashe Tagwirei, known among the corrupt elite as Queen Bee. The Reserve Bank recently ordered all banks to freeze his accounts and he was thought to have already fled the country.

By quadrupling energy charges Mnangagwa must have felt flush enough to hand over a million dollars to the global fund set up to raise funds for primary health care in the third world. it wasn’t exactly a charitable gesture, just the membership fee for an organization that has approved grants of $1.7 billion to Zimbabwe since 2002 – coincidentally the same year the Vigil started outside the Zimbabwe Embassy in London.

Nevertheless, the French trip, during which he also took in Uganda, was strongly reminiscent of the Mugabe days – always expensively flying off somewhere, often to the most obscure gatherings. On one occasion Mugabe set off for some minor meeting in India where they hardly knew who he was. Perhaps it was a meeting of the Hyderabad City Council’s Finance Committee . . .

Now seventeen years after the start of our Saturday protests it seems that little has changed. Mugabe becomes Mnangagwa. it’s all the same: Zanu PF brothers in alms feeding off the country that produces nothing but poverty and refugees – world class beggars and fraudsters.

John Sparks, the Africa correspondent of Sky News, eloquently expresses what we feel: ‘There was one particular rumour that rocketed around the city of Harare this week. It was a scrap of information, shared on the streets and on social media, which speaks volumes about the desperate state Zimbabweans now find themselves in. The word was, staff at a government office had started printing Zimbabwean passports. A massive queue, thousands of people long, formed in the early morning light as residents of the capital grasped the opportunity to get their travel papers. If there is a communal dream in this beleaguered nation, it generally involves leaving it – to find food, work and a little stability abroad. Unsurprisingly, their hopes were dashed. Members of the queue were told to come back later in the month “for an assessment of the reasons why you need to travel”. The fact is, civil servants cannot produce passports because the government cannot afford to pay for the paper and ink. The country’s registrar general, Clemence Masango, recently admitted to a whopping backlog of 370,000 passports. Nor is Mr Masango likely to get the supplies he needs because this crisis-ridden government is not governing and the economy has virtually collapsed.’

Well, the Vigil has not collapsed though, unlike our first one all those years ago, this time we were greeted by rain, dampening the enthusiasm of the climate change protesters who have been demonstrating in London, bringing traffic in some parts of the city to a halt.