Ever since the November 2017 military coup, in which then iron-fisted late Zimbabwe leader Robert Gabriel Mugabe was toppled, his predecessor Emmerson Dambudzo Mnangagwa has ridden on the mantra of taking the country to an 'upper middle class Utopia' - in which, he promises the majority of its citizens a life of comfort and relative wealth by the year 2030. 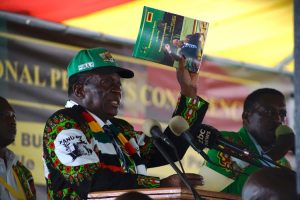 Is this a reality or just a myth?

As a Zimbabwean myself, who has had to endure decades of economic struggles, my prayer and dream would obviously be for this to be a reality. What normal person would wish himself and his family perpetual poverty and doom?

However, if there is one major lesson I have learnt in my 46 years of existence is: “Never let your wishes and hopes cloud the realities of life”.

Indeed, 2030 is still a distant 11 years away – a lifetime in today’s low life expectancy Zimbabwe – and I will be a grand old 57 years; nonetheless, it would have been something to look forward to – having to spend the twilight years in relative wealth.

However, before I start counting my chickens a decade before they have hatched. Before writing down my bucket list of things I will buy, a cruise to my favourite tourist destination for a second honeymoon with my wife Tinta, or building that hilltop mansion of my childhood dreams, I need to seriously evaluate the reality of such a lifestyle.

As the wise always say, “Nothing on this earth is completely new, so always learn from what has come before or what we already have”.

The best place to start would be our nearest upper-middle-income neighbour – South Africa.

South Africa is one of only four African countries ranked as having an ‘upper-middle-income economy’ by the World Bank – the others being Botswana, Gabon, and Mauritius. It reportedly has a Gross Domestic Product (GDP) of US$385 billion, GDP per capita of US$13,865 (ppp), and foreign exchange reserves of US$50 billion in 2019.

The country is also the only African member of the G20.

Indeed, it does. Exceptionally so, for that matter!

So why should I not start penning that bucket list after all? God willing, I will still be around in 11 years time.

However, we need to go deeper in our analysis, as the story is far from over. How do the majority of South Africans live? Are they living in an African version of the ‘land of milk and honey’?

In fact, a fair share of Zimbabweans have migrated to South Africa, whilst others have visited the country at least once in their lives, therefore, most are aware of the standards of livelihood of the vast majority in that country. I also worked there for some years for an NGO that mainly focused on poor communities residing in informal settlements.

The majority of South Africans live in poverty – largely either residing in shacks, or in government-provided RDP houses, or in the rural areas.

As a matter of fact, in 2019, the South African unemployment rate stands at 29.0%, and 49.2% of the adult population lives below the upper-bound poverty line (UBPL), and 32% live below the cost to secure a basic livelihood.

Now is that the life Zimbabweans are being promised by the Mnangagwa government as a ‘heaven on earth’ that we all should ‘tighten our belts’ for – as we are asked to make sacrifices today, through Bretton Woods Institutions induced austerity measures? What are we being asked to suffer for today, so that we can ‘enjoy’ in 2030?

Today, our government is busy taxing us left, right and centre so that they achieve a budget surplus just to please these Bretton Woods Institutions, yet sinking us deeper into more debt – all in a drive to attain this ‘upper middle income’ status by 2030.

The government is enslaving us to the International Monetary Fund, World Bank and the Paris Club for generations to come. One can not sink into debt so as to merely build infrastructure, yet the country is endowed with amazing wealth – such as diamonds, platinum, gold, and so much more. Why do we then need to enslave ourselves to these institutions in a cycle of debt that will only achieve one thing – bondage for our children and their children?

These austerity measures have merely served as ‘curtain raisers’ for the real suffering awaiting Zimbabweans in 2030!

Today, most Zimbabweans can not even afford the most basic commodities, as prices of nearly everything skyrocket out of reach – yet, salaries have largely remained unmoving.

Strikes by workers – from both the public and private sector – have been the order of the day, as the unwinnable race to catch up with prices starts. Yet, as we have already witnessed with our ‘upper middle income’ neighbour, this race will, in fact, get worse by 2030.

What could be the problem?

We have our priorities upside down…that is what is wrong. We are focusing on selling off our resources – including minerals, land and human capital – to foreign entities. We are virtually selling off our country to the highest bidder.

We are letting go of what makes us wealthy – the means of production. And that is a big mistake.

Herein comes another losing mantra: ‘Zimbabwe is open for business’ – whereby, we are dishing away our wealth – which we should own – to foreign entities. No wonder that during the recent United Nations General Assembly in New York, the government reportedly offered land to all those foreign business people who invested in our health sector.

…and we laugh (or blame) King Lobengula of selling our country to Cecil John Rhodes! Well, what our government is doing is far worse!

God blessed us with all the wealth that the rest of the world can only envy – that is why Europeans scrambled for Africa in the 18th and 19th centuries – yet, we never learnt anything from this.

If we keep and own the means of production – even bravely taking the first steps, without rushing to be giants – our wealth will benefit us for generations to come. We need to focus exclusively on developing and growing our own local businesses – mining, farming, manufacturing, retail, and so forth. What should only leave this country are exports of finished valued-added goods manufactured by our own people, which will earn us the much needed foreign currency.

That way, not only will our wealth grow and stay in this country – developing and benefitting the local people – but, the growing locally-owned business entities will automatically result in more taxes for the government for more infrastructural development, better salaries for civil servants, as well as better equipped hospitals and schools.

Only in that way, can we dream and expect a future of opulence and comfort.

The reason why South Africa’s ‘upper middle income’ status is a disaster for the majority is that they did what Zimbabwe is copying and pasting – the majority of its people do not own the means of production, and thus, are mere servants of the very few rich people, mostly of foreign descent.

Therefore, when we hear of our government’s so-called international re-engagement efforts paying off as we attract foreign investment (read: ‘parcelling away our wealth’), we should all be worried…be very worried.

Let no one is deceived. There is no gold pot or some leprechauns at the end of the ‘Zimbabwe is open for business’ rainbow! Zimbabwe is headed for disaster with this government’s blurred vision of an ‘upper-middle-income economy by 2030’.

● Tendai Ruben Mbofana is a social justice activist, writer, author, and speaker. Please feel free to WhatsApp/Call him on: +263733399640, or email: [email protected]