International Olympic Committee (IOC) Athletes' Commission chair Kirsty Coventry has admitted she came under pressure to emulate the on field protests made by her fellow Zimbabweans Henry Olonga and Andrew Flower. 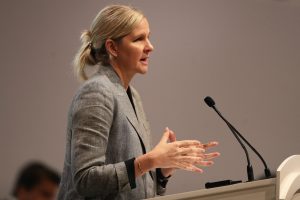 Both wore black armbands at a 2003 Cricket World Cup match against Namibia in Harare to “mourn the death of democracy in Zimbabwe” under President Robert Mugabe.

“They decided as a team to do that,” the double Olympic swimming gold medallist Coventry told insidethegames.

“I don’t want to speak on their behalf but obviously what happened after that with them, not necessarily playing for Zimbabwe, I think if they were to look back now, they would say maybe they would have done things slightly differently.”

Olonga and Flower fled the country after their gesture.

“I have had criticism in my career to say you should have acted the same way and my response has always been to say if I had done that I wouldn’t have been able to potentially continue doing what I loved,” Coventry, now the Sports Minister in Zimbabwe, said.

“What i was doing through my swimming was bringing an awareness to a situation to a country that didn’t have any light being shone on to it.”

Coventry added: “Myself, Henry and the Flowers, we have all had that conversation.

“We all agree that the way in which we all decided to do things achieved the same goal at the end of the day.”

The IOC Athletes’ Commission is drawing up guidelines for Tokyo 2020 in the wake of recent protests at sporting events.

Coventry, speaking at the Association of National Olympic Committees (ANOC) General Assembly in Doha last week, revealed the IOC Athletes’ Commission had spoken to athletes through a variety of different channels.

She claimed a recent conference call had shown there was strong feeling among athletes that protests should take place away from medal ceremonies and the field of play.

“We have seen it happen at the FINA World Championships and we have seen it in Lima [at the Pan American Games] and athletes are talking about this,” Coventry said.

“To protest on a podium with people next to you who maybe don’t believe in what you are saying, we don’t really believe in that.

“How we are approaching the situation is to get athletes to understand if they have something they want to shine light on, they can do that using their social media and talking to the press.”