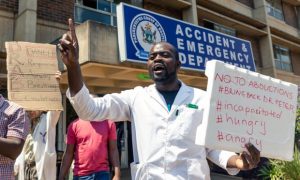 Zimbabwe is facing the worst economic crisis since 2008, when inflation got so bad it had to print trillion-dollar notes. Many thought after Robert Mugabe fell two years ago things would get better, but they haven’t. Nearly everyone is suffering, but recently, it’s doctors who’ve taken to the streets in protest. NPR’s Eyder Peralta reports.

EYDER PERALTA, BYLINE: The doctors gather in front of one of the big public hospitals in Harare.

PERALTA: Since the beginning of last month, junior doctors have not been showing up to work. Dr. Tapiwa Mungofa stands before his peers and says doctors are now being paid less than $100 a month. That’s not enough to eat, not enough to pay rent.

PERALTA: The night before, the head of the doctors union, Dr. Peter Magombeyi, a pediatrician who had led this strike, was abducted. The doctors had no doubt the government was to blame, so the fear is palpable.

MUNGOFA: We are now considering the workplace and even our homes unsafe for doctors. We don’t know who is going to be taken next.

PERALTA: The doctors take off. They march around the hospital campus.

PERALTA: But they never leave the gates because that would mean facing off with security forces.

PERALTA: Right now, it’s not just doctors who are hurting. Zimbabwe’s currency has tumbled. Inflation is sky-high. And the markets have lost trust in the government. Economist Tony Hawkins.

TONY HAWKINS: So you’ve got a sort of a vicious circle relationship. And the authorities are really at a loss to know what to do.

PERALTA: In real terms, the government has few dollars to pay for essentials – gasoline to run generators, chemicals to treat water, money to pay teachers and doctors. For regular folk, the minimum wage keeps dropping. In just one week, it lost almost 40% of its value. They now make just $20 a month. One of the big problems is that Zimbabwe lacks the reserves to prop up its currency.

HAWKINS: It’s hard to see a way out of this unless there’s some kind of international bailout.

PERALTA: And the international community has been waiting for real democratic changes in order to step in. The abduction of the doctor hasn’t helped, but Sibusiso Moyo, the country’s foreign minister, says they had nothing to do with it.

Still, about 50 other government critics have been abducted in recent months, and several activists were criminally charged by the government after they were found. Is this not the way old Zimbabwe used to deal with its foes, I ask.

SIBUSISO MOYO: It’s not easy to move from one regime into the next.

PERALTA: This is a new government, he says, that is, quote, decongesting minds and teaching people to unlearn the past.

MOYO: And therefore, when you say it looks like, because of certain issues, we may be the same like the previous, it is only because everybody is human and that people are likely to fall into the previous.

PERALTA: The day after the first protest, doctors do leave the hospital.

PERALTA: They walk onto the city streets, but they are stopped by police about a block from the presidential offices. Dr. Karongo, who only gives his first name because he fears retaliation, stands right in front of officers in full riot gear. The abduction, he says, made them push through their fear.

KARONGO: For this incident, everyone is prepared to come out and be heard.

PERALTA: This time, it was hundreds of them. Senior doctors and nurses joined in. They sat at a major thoroughfare as workers gawked from buildings above. Dr. Tinga, who only gave her first name because of the same fears, says they were forced to the streets.

TINGA: We are being forced to work in an environment where there’s nothing to use in the hospital.

PERALTA: No pain medicine, no gloves, no needles – and some doctors have had to turn to farming to make a living. Dr. Tinga is having to take money from her parents abroad to make ends meet. I ask if she ever imagined herself on the streets of Harare facing off with riot police.

TINGA: Never. I thought life was going to be really good once I was done with med school. I thought med school was the worst that my life was ever going to experience, so it’s crazy, yeah.

PERALTA: Dr. Peter Magombeyi was eventually found in a field far from Harare. He says he remembers being held in a basement and electrocuted. After initially being barred from leaving, he is now in South Africa getting medical treatment.