When Munashe Chirowamari left home on 11 October 2018 to join fellow trade unionists on a demonstration organised by the Zimbabwe Congress of Trade Unions (ZCTU) against the ever-worsening economic situation in the country, little did he know that the state would not recognise his right to protest. 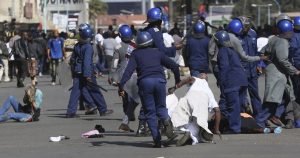 “We were at the balcony of the ZCTU offices when the police started manhandling the [ZCTU] President [Peter Mutasa]. I thought it would be a good idea for us all to either sit down or follow the president to the police vehicle.

“That was when one of the police officers dragged me outside and began hitting me with a baton all over my body. He then bundled me into the police vehicle, together with President Mutasa and others,” he says, narrating his ordeal to Equal Times. “They beat us all the way to the police station, where we spent the night before appearing in court the following day,” he adds.

Chirowamari and six others arrested on that day were charged with bigotry (words or deeds that can result in a crime against public order) although the charges were later withdrawn.

And just last month, the acting president of the Zimbabwe Hospital Doctors Association, Dr Peter Magombeyi, made international headlines after he was abducted from his home in Harare by suspected state security agents for organising a strike by government doctors to demand better salaries.

Magombeyi was discovered four days later after being dumped in the bush 40 kilometres west of Harare. Allegedly tortured and poisoned by his captors, he underwent medical treatment in South Africa.

The stories of Chirowamari and Magombeyi are shared by hundreds of other trade unionists, opposition politicians and human rights activists whose right to freely assemble and associate is being trampled on by the Zanu-PF government, currently headed by President Emmerson Mnangagwa.

The repression of trade unionists has been a permanent scar on Zimbabwe’s political landscape since the early 1990s, but ever since President Mnangagwa took over from the late President Robert Mugabe in 2017, many say the climate of fear has worsened.

According to the Zimbabwe Association of Doctors for Human Rights, at least 18 people have been killed in demonstrations since Mnangagwa took power. Meanwhile hundreds of trade unionists and campaigners continue to be harassed, arrested, raped and abducted for peacefully gathering to express their frustration at living in a country with the second highest inflation rate in the world after Venezuela (161.8 per cent according to the IMF, although some economists have talked about an inflation rate of 570 per cent). Zimbabwe is also a country where unemployment levels and the cost of living continue to soar beyond all reasonable proportions, even by the minute, and where those who have jobs are rarely paid enough to survive – if they are paid at all.

ZCTU leaders President Peter Mutasa and Secretary General Japhet Moyo are currently on trial for “attempting to overthrow a constitutionally elected government or alternatively inciting violence” as a result of organising a six-day work ‘stay away’ in January 2019 against inflation, rising fuel costs and shortages of daily food essentials. Mutasa, Moyo, other members of the ZCTU leadership and their families have faced harassment and death threats in recent weeks. The court case has been postponed until 20 November and Moyo and Mutasa are facing a 20-year jail term if convicted. Twenty other trade unionists in the eastern border town of Mutare are also on trial (for bigotry) for engaging in a demonstration.

In February this year, Kwasi Adu Amankwah, secretary general of the International Trade Union Confederation’s (ITUC) regional body ITUC-Africa was detained for several hours while visiting Zimbabwe on a solidarity mission with the ZCTU.

In September, thanks in part to lobbying from the international trade union movement, the Zimbabwe government invited the United Nations Special Rapporteur on the Rights to Freedom of Peaceful Assembly and of Association, Clément Nyaletsossi Voule, to assess the situation in the country – the first such visit to Zimbabwe by an expert appointed by the United Nations Human Rights Council.

During his 10-day mission, Voule met with the ZCTU leadership, opposition political party leaders, community and civil society leaders, chiefs, the judiciary, the UN’s country team and a number of government ministers (though, notably, not the Minister of Labour, Sekai Nzenza).

Although a final report from the Togolese human rights expert will be presented at the Human Rights Council meeting in June 2020, he told members of the press at the end of mission: “Due to the current economic situation the country is facing, mass striking appears to be taking place regularly in the country. However, reactions by the authorities do not appear to be in line with their constitution and international commitments.”

Voule said he had heard “extremely disturbing reports of excessive, disproportionate and lethal use of force against protesters, through the use of tear gas, batons and live ammunition” and how trade union leaders had spoken of the “toxic environment of constant retaliation and fear” currently facing labour activists.

Although the draconian Public Order and Security Act of 2002 – which gives police the power to restrict marches, demonstrations and protests actions – will soon be replaced by the Maintenance of Peace and Order Bill, Voule said the latter still falls short of protecting the rights of citizens to peacefully assemble as it continues to “give law enforcement agencies broad regulatory discretion and powers”.

During his visit, Voule went to Hwange in north-west Zimbabwe to meet with the female relatives of workers at the Hwange Colliery who have not been paid in full since 2013. Until last year, the women had been peacefully camping on the mine premises in protest over US$4.6 million in unpaid salaries on behalf of their husbands, fathers and brothers, who were unable to strike for fear of dismissal. The company took the women to court on civil and criminal charges for trespassing, and some of the protesters received death threats. Voule described the Hwange case as demonstrating the “the role that non-state actors also play in creating an environment of fear” in Zimbabwe.

Voule also expressed concern at the slow pace in which much-needed labour law reforms are taking place. Zimbabwe’s unions urgently want public sector workers to enjoy the same rights to collectively bargain and strike as workers in the private sector. Amongst other measures, unions are also calling for an end to the casualisation of labour, an end to the late and non-payment of wages, the introduction of minimum redundancy packages and end to the victimisation of workers’ representatives.

The special rapporteur called on the government to create an enabling environment for civil society, protect the rights of citizens to organise and assemble, and withdraw all criminal charges against trade unionists. But Moyo tells Equal Times that he sceptical that Zanu-PF are prepared to make the radical changes necessary to improve the situation for Zimbabwe’s people.

“We still do not believe that the government is honest in its dealings with the United Nations. They are just desperate for [international economic] re-engagement with Zimbabwe but they have not displayed any real willingness to reform,” says Moyo. “The government does not need the special rapporteur to motivate reforms; it needs the political will to do things differently.”

Mnangagwa has been trying to restore ties with the United States and the European Union since he came to power in November 2017, and although his ‘open for business’ mantra was meant to attract foreign capital to the country, investors have largely stayed away. Meanwhile, the government is unable to borrow from international lenders due to an outstanding external debt of US$9 billion.

On Voule’s recommendation for the government to the drop charges against trade union leaders, Moyo says that the International Labour Conference had made a similar demand in June but that in response, unions have faced nothing but escalating violence and threats against their families. ‘The government has failed to protect its citizens and has become an accomplice to rogue elements that are freely tormenting those perceived to oppose the government policies,” says Moyo.