Maputo (AIM) – As results trickle in from across Mozambique from Tuesday’s general and provincial elections, the indications are of a low turnout. 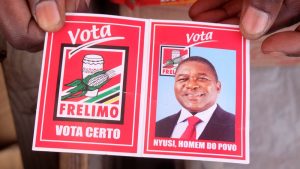 Photographs of the results sheets (“editais”) posted on polling station walls, and reproduced on the Facebook page of the coalition of election observation bodies, known as the Sala da Paz (Peace Room), show that in many cases turnout was well below 50 per cent.

Thus in a station in the central city of Quelimane (code number 04008-09), out of 384 registered voters only 53 voted in the presidential election – a 14 per cent turnout. 34 of these votes were for incumbent President Filipe Nyusi, 15 for Ossufo Momade of the main opposition party, Renamo, and two for Davis Simango, leader of the Mozambique Democratic Movement, MDM.  There was one blank and one invalid vote. (In the following figures, for simplicity of reading, AIM omits the small number of blank and invalid votes, and votes cast for minor candidates.)

In a station in Maringue, in Sofala province (code 071364-05), only 181 people voted out of the 566 registered voters, a 32 per cent turnout. In the provincial assembly election, 124 of then voted for Frelimo, 31 for Renamo and six for the MDM.  In the presidential election in the same station, Nyusi took 131 votes, Momade 33 and Simango two.

In the parliamentary election at the same station, Frelimo won 45 votes, Renamo 15 and the MDM 11. This edital was remarkable because there were 16 minor parties standing, and none of them won a single vote.

This sample of stations, however, is still too small to draw any overall conclusions about turnout.