A Harare man was found dead early this morning on the railway line that separates Mufakose and Budiriro 5B, his family suspects foul play. Willard Matsanga, 24 better known as Wezha, was found by a passer-by lying beside the railway track. He is alleged to have been murdered on his way to Budiriro. 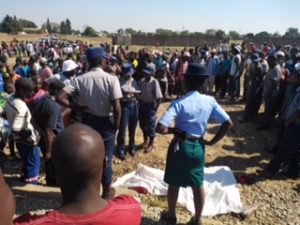 He had deep cuts in the face and head suspected to have been caused by a sharp golf club that was found nearby, and his body had bruises.

When the Zimbabwean news crew visited the alleged murder scene, his body had not been ferried to the mortuary.

Family spokesperson Silvia Matsanga said she was failing to come to terms with her brother’s death.

She said her brother had no money on his person, but police who searched his body recovered his USB and wallet intact.

“I last saw my brother fit and well yesterday (Friday) when he was leaving for the bar. I was informed by my neighbours around 7 AM that my brother had been found dead near the railways,” she said.

“I rushed to the scene only to find my brother lying dead. I couldn’t believe my eyes. Blood had clotted on his face and head  from  deep cuts he sustained.”

Silvia said she suspects that one of his girlfriends, who allegedly fought over him at the night club on Saturday night, had a hand in her brother’s death.

“We were chased by thugs late at night when we were coming from the bar,”  said his friend Taurai.

The family spokesperson said they are still waiting for their parents to arrive from their rural home in Buhera for burial arrangements to be finalised.

Residents who spoke to the Zimbabwean expressed shock over the incident.

“Willard was a very friendly person. Everyone in the neighbourhood knew him. I still can’t believe he’s gone,” said a neighbour who preferred anonymity.