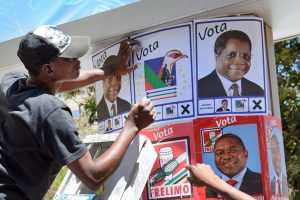 At a Maputo press conference, the MDM general secretary, Jose Domingos, claimed that the elections had been marked by serious fraud, including ballot-box stuffing organised by polling station chairpersons, associated with members of the defence and security forces, and certain national “observers”.

“The work of the opposition was obstructed and the exercise of democracy was denied”, accused Domingos. “These elections were not fair, free or transparent. They were the most violent elections the country has ever organised”.

Domingos attacked those foreign election observers who described the elections as “orderly and peaceful”, and who called on the political parties to use the legally established channels in the event of any election disputes. He claimed these observers “are acting as spokespersons for the devil, in exchange for I know not what”.

The election results announced so far “do not reflect the will of Mozambicans”, he added. “In no civilised country would this sort of election be accepted”.

Domingos urged the electoral administration bodies “to restore legality to this process”. He did not say what the MDM would do if this appeal goes unheeded.

The official results have not been announced yet, but the polling station results published by the Mozambican media so far indicate a landslide victory for the ruling Frelimo Party and for incumbent president Filipe Nyusi.

An alarming number of frauds have been reported, which certainly damage the integrity of these elections, but they are not on a large enough scale to account for the predicted 70 per cent victory of Nyusi and Frelimo.

The MDM was in a particularly unenviable situation, since it was squeezed between Frelimo and the main opposition party, Renamo.