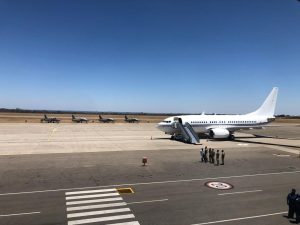 The hired VIP jet can be seen at the Joshua Nkomo airport just outside Bulawayo. The president prefers to use hired jets from Europe or the Middle East I stead of planes from the bankrupt state airline, Air Zimbabwe which has only one serviceable Boeing 767. The plane has become totally unreliable lately because of mechanical problems.

According to the jetliner’s owner’s website, the aircraft is described thus: