Maputo (AIM) – One person died during police intervention against a crowd in the northern Mozambican port city of Nacala, during the counting of votes at the polling stations after Tuesday’s general and provincial elections. 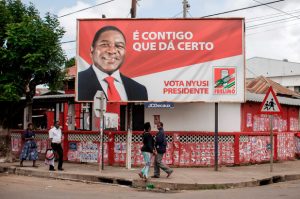 According to a report by correspondents from the anti-corruption NGO, the Centre for Public Integrity (CIP), the police intervened when the crowd began to set tyres on fire. In addition to the fatality, the police shot four other people in the legs in their efforts to disburse the crowd,

The crowd had gathered in obedience to calls by leaders of the main opposition party Renamo, notably the mayor of the central city of Quelimane, Manuel de Araujo, to gather outside the polling stations “to control the vote”.

In practice, crowds who obeyed this call were too far away from the stations to see anything going on inside them, and merely exposed themselves to lethal force in the event of clashes with the police.

A crowd also gathered outside polling stations at a school in Angoche which, like Nacala, is in the northern province of Nampula. Tensions ran high because, earlier in the day, Renamo supporters suspected that polling station chairpersons had filled in extra ballot papers in support of the ruling Frelimo Party.

According to the “Mozambique Political Process Bulletin”, published by CIP, when the crowd approached the polling stations, the police fired into the air seven times, and used tear gas in an attempt to disperse the protestors. Three classrooms in the school were set on fire, but there are no reports of damage to the election material.

At the Gulamo polling centre, in Mozambique Island, off the Nampula coast, at about 19.00 the police fired three shots into the air, to disperse a crowd, the Bulletin reported.

Elsewhere, the police expelled duly accredited observers from the count.  At a polling centre in a school in Mocubela, Zambezia province, police threatened a CIP observer and forced him to leave. This police behaviour was entirely illegal.

At a polling station in Guro district, in the central province of Zambezia, the station chairperson threw out independent observers.

At one Nampula station, the Bulletin reported the police preventing observers from taking photos of the result sheets (“editais”) posted on the walls. The editais are public documents and any citizen, observer or not, is fully entitled to copy or photograph them.