This Sunday, 13 October, John Henry Cardinal Newman will be declared a Saint by Pope Francis in Rome and among the thousands who will witness the event will be Charles, Prince of Wales. 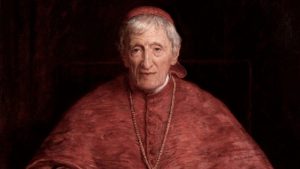 The prince writes these words in the Times, ‘Newman could advocate without accusation, could disagree without disrespect and perhaps most of all could see differences as places of encounter rather than exclusion’.  He had an inquiring mind and was always ready to listen and to weigh what others said.

Charles has written a beautiful tribute to a great man. Newman grappled all his life – he was 89 when he died – with pressing issues of education and faith.  He had the intellectual ability to think through – and to pray through – questions that emerged in a century where reason and science posed serious challenges to long-held beliefs. Outstanding among his contributions was his assertion about the development of doctrine and the place of the laity in the Church. The essentials of doctrine do not change but the way they are expressed can undergo evolution and development.

He made a detailed study of the Arian controversy in the fourth century. The priest Arius held that Jesus, Son of the Father, could not be equal to the Father and so was subordinate to him. This view had serious implications for our understanding of ‘salvation’.  If Jesus is not God then we are left high and dry. No man could do what he did and does for us.  The Council of Nicea, in 325, condemned Arius and affirmed the absolute equality of Father and Son. But opinion remained divided and the Christian emperors of the period oscillated between Nicea and Arius and the bishops were inclined to follow their lead. It was “a time when the fidelity of the laity had ensured the Church’s continuance ‘when the body of the bishops failed in their confession of the faith’.”  Newman believed therefore that the Church was healthiest when able to encourage people to an intelligent grasp of the faith, and weakest when only requiring of them an ‘implicit faith in her word, which in the educated classes will terminate in indifference and in the poorer in superstition’.” [1]

Perhaps this gives us a taste of the sort of man Newman was and the point of making him a saint is to make him more widely known and his contribution to faith and culture more easily accessible. It is not just the dictators of our age but even the duly elected leaders who govern our lives who could learn about ‘places of encounter’ in contrast to ‘places of exclusion’. We still live with too many walls – both physical and mental – that exclude others and so hold us back from welcoming those who are different and benefitting from the meeting.