Popular Zim dancehall musician Ian Makiwa, popularly known as Platinum Prince, was abducted by a group of unidentified, masked and armed men a few hours after his arrival from his South Africa tour According to an alert by a reliable source, the incident happened around 4 pm on Sunday. 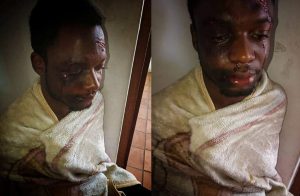 “The men did not produce any warrant or give reasons for the abduction. The men just blocked the way of the car that the controversial musician was in and assaulted the driver who was trying to understand why they had blocked the road with their car in the process.

According to the source, the men then took the musician and put him in a car boot and disappeared

In September this year, Platinum Prince released a track entitled NDIYO YACHO HERE MR PRESIDENT in which he seemed to be questioning the President of Zimbabwe over the current economic situation, He then released a video for the song early this month. In 2015 Platinum Prince also did a track called Ndeip President which was aimed at the former President. The self-claimed “Ndururani” was warned that his music was growing more political.

“The source said they are working with the team to ensure that all remedies available at law will be pursued with the urgency that this crisis deserves.”