The sanctions are targeting 85 people, including Zimbabwe President Emmerson Mnangagwa and 56 businesses.

End sanctions against Zimbabwe now. That’s the call from protesters picketing outside the US and EU embassies in Pretoria. Courtesy #DStv403

JOHANNESBURG – Lobby group, the Coalition against Sanctions, says sanctions against Zimbabwe are hurting the people and not the politicians.

The coalition, flanked by the ANC and PAC, have handed over memorandums of demand to the United States and European Union embassies, demanding an end to sanctions.

The organisation says the measures are unjust and punishing the population.

The sanctions are targeting 85 people, including Zimbabwe President Emmerson Mnangagwa and 56 businesses, which are seen as crucial to Zimbabwe’s economy.

“Here is what we are saying I am just a citizen with a mother in Zimbabwe crying with no food in the stomach, because our government is saying sanctions are the cause right now we know that there is mismanagement, there is corruption a lot of things that can be said to the government of Zimbabwe,” said Coalition against Sanctions director Wellington Manyonda.

Zimbabwe’s economy has struggled to grow for many years and is expected to contract by 7-percent this year.

While it seems the days of hyperinflation are back again, after inflation shot up 300-percent from 4.3-percent in 2018 to around 175.6-percent in June this year.

The US embassy in Harare has denied that the sanctions are against Zimbabwe.

The embassy says they are aimed at those who engage in corruption and violate human rights.

On its Twitter account, the embassy says the sanctions do not prohibit trade between Zimbabwe and the US.

5 Facts about U.S. Sanctions in Zimbabwe 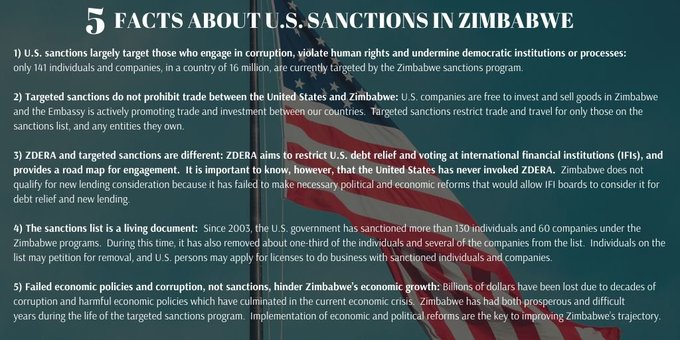 1,279 people are talking about this

The EU has denied imposing sanctions on Zimbabwe.