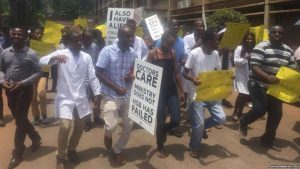 Striking Zimbabwean doctors are being urged to go back to work. – FILE PICTURE

Zimbabwe’s hospital doctors are continuing their six-week stoppage, despite a court order October 10 to return to work within 48 hours. The Zimbabwe Hospital Doctors Association members walked out on September 3, demanding their wages are pegged to the US dollar. With inflation at a runaway 500 percent, they rejected a government pay offer of a 60 percent increase. The doctors are also protesting the lack of medicines and equipment in hospitals. Doctors argued in court that they are not on strike but “incapacitated” as they cannot even afford to travel to work. Fuel prices rose 400 percent since the beginning of the year. They plan to appeal. Nurses at two of Harare’s biggest hospitals joined the strike, and rural teachers began a “stay at home” protest on Monday. Strike leader, Dr. Peter Magombeyi, abducted from home September 14 and dumped outside Harare days later, is making a good recovery from his injuries. He was allegedly kidnapped and assaulted by state forces.

Police fire on strikers in Eswatini

Civil servants demonstrating in the landlocked kingdom Eswatini (formerly Swaziland) were injured after police opened fire. The NAPSAWU, the Swaziland National Association of Teachers and the Swaziland National Association of Government Accounting Personnel members walked out on September 23 to demand a pay increase of 7.85 percent. The government offered three percent, conditional on the strike ending and the economy improving. On September 25, police used rubber bullets against demonstrators in the capital city Mbabane, injuring 15. On October 2, riot police using live ammunition, tear gas and rubber bullets attacked thousands of demonstrators in the commercial hub Manzini, leaving 17 injured. A labour court began Thursday to hear the government’s arguments that the strike be made illegal on the grounds that it is political. The strike is affecting schools, the revenue collection department, the central transport administration, immigration offices and other government departments.

Workers in Nigeria are poised for national strike action after the federal government failed to fully implement a pay agreement. President Buhari signed a new national minimum wage deal in April. The Joint National Public Service Negotiating Council and the Association of Senior Civil Servants of Nigeria are seeking a minimum wage of N30,000 per month. According to President of the Trade Union Congress Quadri Olaleye, however, a real living wage to meet the needs of a worker and his family is N72,000. The unions said action will begin if a reconvened meeting Wednesday with the government does not ratify the agreement. Last year, Nigeria overtook India in poverty indices, with 43 percent of the population either unemployed or underemployed.

After three months of pay negotiations, South Africa’s National Union of Mineworkers (NUM) is preparing to settle a sellout deal with Royal Bafokeng Platinum (RBPlat). The platinum miners were demanding a 25 percent wage rise, but Geoffrey Moatshe, the NUM Rustenburg regional chairperson, announced the union would settle for 10. He said, “[I]f we can pass the housing issue we can have a deal.” The union wants the company to raise the housing allowance to R12,500 a month. The NUM has 6,000 members at RBPlat. Platinum-mining operations in South Africa supply over 80 percent of world demand.

Cleaners, support staff and security guards at the University of Johannesburg (UJ) South Africa began strike action on October 4. The 700 National Union of Metalworkers of South Africa (NUMSA) members are demanding they be permanently hired by the University. A NUMSA spokesperson stated, “Most of the workers have been outsourced since 2016 with no sign of being permanently hired or [having] benefits so UJ is basically acting like a labour broker.” NUMSA claims management refuses to negotiate.

The trial began October 9 of nine human rights activists, arrested after a protest outside the Finance and Economic Development offices in Zimbabwe capital Harare. The protest was to demand an increase in teachers’ salaries and improved work conditions. The nine, including Amalgamated Rural Teachers Union of Zimbabwe members, were charged with criminal nuisance for singing and dancing while carrying a mini-coffin and wooden cross to symbolise the death of their salaries.

Cabin crew working for Lufthansa at Germany’s Frankfurt and Munich airports plan to strike between 6 am and 11am on Saturday. The members of the flight attendants’ union UFO are demanding a 1.8 percent pay rise over the next six-month period. The strike is expected to hit the five companies comprising the Lufthansa group, Lufthansa, Eurowings, Germanwings, Cityline and Sunexpress. Other strikes are planned. For its part, Lufthansa has challenged the legal right of UFO to represent cabin crew and may go to court to question its status. The strike at Lufthansa is only the latest in a series of strikes by airline workers across Europe. Lufthansa staff and cabin crew and ground staff employed by Italian airline Alitalia walked out over the summer. Last month, the British Airline Pilots Association called off a pilots’ strikes at British Airways and the UK arm of Ryanair.

Union calls off strike by transport workers in Greek capital

Following talks on Tuesday, the Greek unions called off strikes by transport workers, including one planned for Thursday. Transport workers in the Greek capital, Athens, held a series of strikes over the last few weeks over the renewal of their collective labour agreement for this year. The GSEE and ADEDY members are employed on the Athens Metro, the Kifissia to Piraeus railway line and the tram system. Civil servants and transport workers also walked out recently against the labour legislation and privatisation. In July, Syriza (Coalition of the Radical Left) lost the elections to New Democracy after four years in government, punished for betraying its electoral promises to end European Union austerity measures imposed following the 2008 banking crisis.

March by steelworkers in Newport, Wales

Hundreds of UK steelworkers and their families and supporters marched through the city of Newport on Saturday. They were protesting plans by Tata steel to close the Orb Electrical steel plant in the city with the loss of 380 jobs. Tata put the plant up for sale in May last year but failed to find a buyer. According to Tata it would cost £50 million to upgrade the facility to make it viable. Tata Steel Europe, the UK’s largest steel company, employs over 8,000 in the UK. It is a subsidiary of multinational conglomerate Tata Group, one of India’s largest companies. The other major steel producer in the UK, British Steel—which employs 5,000—recently avoided closure when a Turkish buyer came forward. The “rescue” plan will involve a productivity drive and hundreds of redundancies.

Teaching staff at 23 UK sixth-form colleges were set to strike Thursday. They teach 16-19-year-olds. A march and rally outside the Department of Education in London was planned. The National Education Union members are protesting the lack of funding for sixth-form colleges and the resultant erosion of wages. Teachers have suffered a 16 percent cut in real pay since 2010. Further strikes are planned for November 5 and 20. Over 80 percent of those balloted voted to strike. However, the 50 percent threshold of those eligible to vote was not met at some colleges, and colleges which just missed the threshold will be reballoted, so staff at more colleges may walk out November 20.

Around 5,000 French firefighters marched through Paris on Tuesday. They were calling for improved working conditions, higher pay and defence of their pension rights. A junior firefighter only earns €1,500 a month before tax. A delegation met interior minister Christophe Castaner, but nothing was resolved. Some firefighters broke away from the main demonstration and were attacked by riot police using water cannon and tear gas.

Around 50 UK health visitors working for Lincolnshire County Council have been on strike for a total of 32 days since July, as well as holding demonstrations in Lincoln in August. The Unite members have taken action to protest the loss of income since transferring from the NHS to Lincolnshire County Council in October 2017. According to Unite, the workers have lost around £2,000 a year since their employment was transferred. Health visitors who have only worked for the local authority are also being balloted now by Unite. This is in response to moves to set up a two-tier workforce whereby health visitors on grades 9 and 10 would be moved to a different contract and be on a lower pay scale. In total 72 health visitors are being balloted, with the result to be announced on October 25.

Staff working for the UK’s Science Museum Group (SMG) are to hold a 24-hour stoppage on October 23. They have already taken strike action back in August. The Prospect union members are protesting the imposition of a 1.5 percent pay rise. This follows a series of below inflation pay rises that have left SMG staff earning 10 percent less in real terms since 2011. Sites affected include the National Science and Media museum in Bradford, the Science Museum in London, the Museum of Science and Industry in Manchester and the National Railway Museum in York.