People walk home in the dark due to power shortages in Harare, on Monday Sept. 30, 2019. Zimbabwean President Emmerson Mnangagwa is set to present a State of the Nation address Tuesday, at a time the southern African nation is reeling from its worst economic crisis in more than a decade. Zimbabweans are enduring shortages 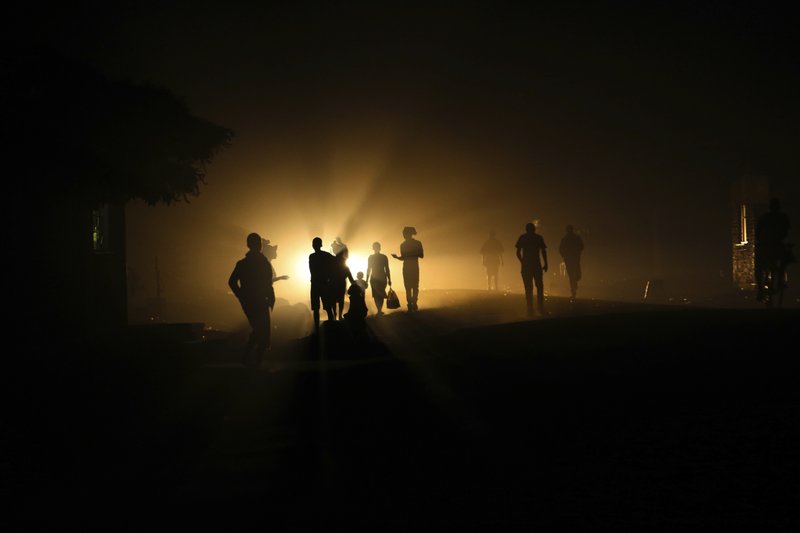 People walk home in the dark due to power shortages in Harare, on Monday Sept. 30, 2019. Zimbabwean President Emmerson Mnangagwa is set to present a State of the Nation address Tuesday, at a time the southern African nation is reeling from its worst economic crisis in more than a decade. Zimbabweans are enduring shortages of everything from medicines, fuel, cash and water- bringing a weariness and disgust that has often flared into streets protests. (AP Photo/Tsvangirayi Mukwazhi)

HARARE, Zimbabwe (AP) — Zimbabwe’s opposition lawmakers walked out of Parliament on Tuesday as President Emmerson Mnangagwa presented his state of the nation address, a sign of the political tensions still gripping the country.

The opposition Movement for Democratic Change party said it does not recognize Mnangagwa, accusing him of rigging last year’s elections. The Constitutional Court threw out the opposition’s challenge to the vote.

Mnangagwa made the speech as Zimbabwe reels from its worst economic crisis in more than a decade.

Hope greeted his rise to power when the late Robert Mugabe was forced out of office in 2017, but now Zimbabweans are enduring shortages of everything including medicines, bread, petrol, cash and even water.

The economic collapse has led to weariness and disgust that often flare into street protests and government crackdowns in what was once one of Africa’s most prosperous countries.

Mnangagwa arrived at Parliament in a Rolls-Royce escorted by police officers on horseback, a ceremonial procession inherited from the colonial and white minority government by Mugabe after independence.

The president observed a minute of silence for Mugabe, who was buried over the weekend .

“As we remember him (Mugabe), let us stand emboldened by the fact that we cannot change the past but the future is in our hands,” Mnangagwa said as the opposition MPs walked out.

However, many say Mnangagwa has inherited more than ceremonial procedures from Mugabe, pointing to alleged acts of repression such as abductions, arrests and torture of government critics as well as economic mismanagement.

Mnangagwa called for dialogue with opposition political parties and an end to the “culture of fear and violence” at a time that his government is accused of being more repressive than Mugabe.

The president also pleaded for more time to resolve the biting economic problems, saying that “getting the economy working again will require time, patience, unity of purpose and perseverance.”

“We have no money, we have no food, hospitals are not working . and you are busy wasting people’s time talking about nothing,” said MDC chairwoman Thabitha Khumalo outside Parliament.

“We need dialogue. We want independent conveners that are going to conduct this dialogue where we map a way forward for Zimbabwe,” she said.

On the streets of the capital, Harare, some said they were not even aware of the president’s speech and continued waiting in lines for basics such as gas and cash.

“I gave up on him a long time ago,” said Samuel Maposa, a taxi driver waiting for gas. “How many speeches has he made and what has changed? Things are getting worse.”

A United Nations envoy who ended a 10-day visit to the country last week observed that “albeit the common belief that a transformation will come, I believe that the long-awaited hopes are fading.”

Clement Nyaletsossi Voule, the U.N envoy on the rights to freedom of peaceful assembly and of association, also highlighted “serious deterioration of the political, economic and social environment since (election period) August 2018 resulting in fear, frustration and anxiety among a large number of Zimbabweans.”