HARARE (Reuters) - Zimbabwe’s public sector unions said on Tuesday they were unable to go to work because of soaring prices, adding to the government’s problems as it struggles to revive the economy. 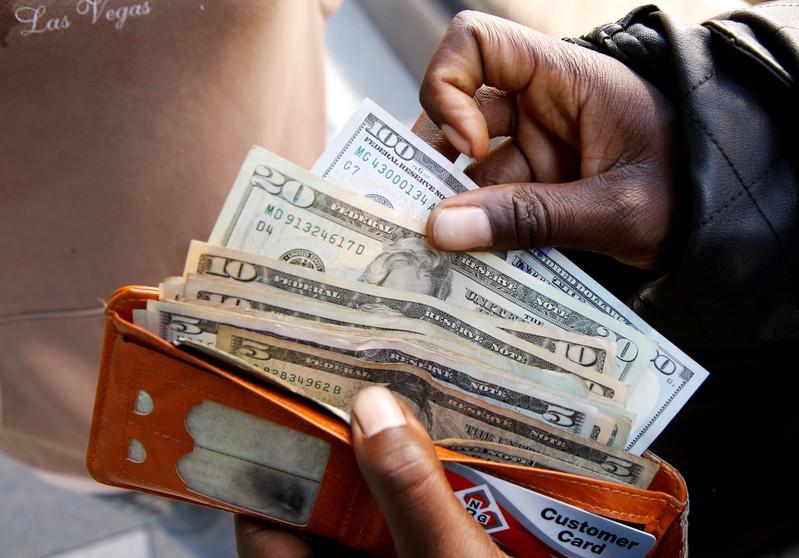 A man displays US dollar notes after withdrawing cash from a bank in Harare, Zimbabwe, July 9, 2019. REUTERS/Philimon Bulawayo/File Photo

The unions however stopped short of calling a strike to give the government more time to respond to their salary demands.

President Emmerson Mnangagwa is grappling with triple-digit inflation, shortages of dollars, fuel and bread, and rolling power cuts that have hit mines and industry.

His government’s moves to end subsidies on fuel and electricity and a decision to re-introduce the Zimbabwe dollar have accelerated inflation and dimmed hopes of economic recovery.

The Apex Council, which groups 14 public sector unions, said it had told the government on Monday that its 230,000 members – which exclude workers from the security and health services – no longer had the capacity to go to work.

Asked if this amounted to a strike, Apex Council co-chair Thomas Muzondo said workers would report for duty only when they were able to do so.

Unions are demanding that government employees should be paid U.S. dollar-indexed salaries. They want the least-paid workers – who get 1,023 Zimbabwe dollars ($67) a month – to receive the equivalent of $475.

In shops, prices of sugar, cooking oil and maize meal are rising at least once a week in line with the weakening local currency, but salaries have fallen behind.

Some public sector doctors have been on strike since Sept. 3 to demand higher pay and have vowed not to return to work even though a court ruled their action was illegal.

The government is caught between placating restive workers and keeping the share of public wages in the national budget low, in line with commitments under an International Monetary Fund programme that ends next year.

The worst economic crisis in a decade, worsened by a drought that cut farm output, has angered citizens. Mnangagwa’s government is anxious to avoid violent protests like those in January after a sharp fuel price hike.

The crisis has echoes of the dark days under late president Robert Mugabe, when hyperinflation reached 500 billion percent and workers stopped reporting for duty as salaries and pensions became worthless.