Harare – Today, in commemoration of International Day of the Girl Child, girls selected from the Junior Parliament of Zimbabwe through an essay competition took the helm of UN leadership replacing the roles of the UN Resident Coordinator, and six UN heads of Agencies making a symbolic statement on the need to empower girls to make decisions, assume leadership roles, and live and thrive in a gender equal society. 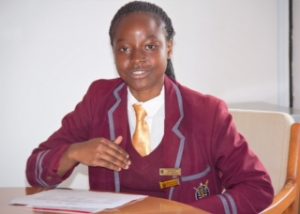 The girls’ takeover campaign was staged under the localised theme #ZimGirlsTakeover to inspire girls as agents of change who are capable of becoming leaders in their own right. The UN agencies “Taken Over” by the girls are the International Labour Organisation, UN Development Programme, UN Scientific and Cultural Organisation, UN Population Fund, UN Children’s Fund and UN Women.

Addressing the meeting participants, the designated UN Resident Coordinator to Zimbabwe for the day, Hon. Chantel Mawunidza, who is also the Minister of State of the Junior Parliament of Zimbabwe, noted that countries cannot achieve their development agenda as long as women and girls continue to be silenced and marginalized in society. Noting that engaging young women and girls as crucial to achieving sustainable development goals, Hon. Muwanidza said, “the UN is committed to working with girls realize their potential and meaningfully contribute to inclusive development and economic prosperity in their society.”

Senator of Junior Parliament, Hon. Vimbai Jukwa who took up the position as the head of ILO, said, “I encourage women and girls to take up leadership roles to achieve gender parity in all spheres of decision-making, including in political, economic, social and public life.”

Junior Parliament’s Hon. Elinah Moyo, who was taking up the position of the Resident Representative of UNDP, expressed that, “Women’s rights and empowerment are key contributing factors to economic growth, social development, political stability and environmental sustainability.” She also commended the UN in facilitating the #ZimGirlsTakeover campaign noting that, “There is no better way to show commitment to improving the life of the girl child than to involve girls in such initiatives. You cannot do anything for a girl without the girl’s active involvement.”

Hon. Kelina Mutate, member of the National Assembly in the Junior Parliament who took over UNESCO during the #ZimGirlsTakeover campaign said, “I am determined to ensure that there are strict laws guarding the girl child from early marriages in Zimbabwe.”

UNICEF Representative for the day, Hon. Naledi Green emphasized the importance of sustainable development goals, noting that, “Addressing violence and discrimination against women and girls is essential to ensure that no one is left behind in the development agenda.”

Hon. Sandra Munhundarima, a judge in the Junior Parliament of Zimbabwe spent the day as the head of UN Women. Expressing her joy about the commemorations for International Day of the Girl Child as a platform to break-through the barriers of discrimination and prejudice against girls, Hon. Sandra said, “I will make sure that girls occupy spaces and know that they have a right to be heard.”

The #ZimGirlsTakeover campaign is part of the Spotlight Initiative programme to eliminate violence against women and girls in Zimbabwe. The Spotlight Initiative with financial commitment of USD 34 million by the European Union begun implementation this year in 23 districts in five provinces. The provinces are: Mashonaland Central, Mashonaland West, Manicaland, Matabeleland South, and Harare.

International Day of the Girl Child has been celebrated each year on 11 October since the United Nations adopted it as an international day in December 2011 to highlight the different challenges that girls face in society. In addition, this day is also dedicated to the empowerment of girls across the globe and the promotion gender equality and human rights.