Earlier this week, the organizers of the anti-sanctions march announced that the 25th of October 2019 would be a historic day. 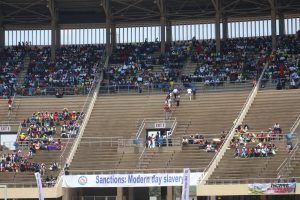 They were right. Today was a historic day, but not for the reasons they thought. It wasn’t because of an earth-shaking turnout by desperately poor Zimbabweans in support of the march. As we all know, that didn’t materialize.

It wasn’t because the leaders of the western world, seeing millions of Africans thronging the streets of the capitals of SADCC countries in support of the Harare regime, were induced by the fear of Africa’s wrath to convene emergency meetings to remove the sanctions.

Instead it was because of the simple act of letting E.D. and his Zanu(PF) bullies have the empty National Sports Stadium to themselves.

Zimbabweans took that big, bold, and necessary first step towards their total liberation, the kind that sends a shiver down the spine of every bully by simply denying Zanu(PF) the legitimizing presence and forced applause of their victims.

Nothing worries bullies more than being ignored. Nothing scares them more than their victims no longer being afraid of their threats. They may not say so, but the echo of each word E.D. spoke in that empty stadium put more fear in the hearts of E.D’s people and those who defend this monstrous regime than any threat from anyone in the opposition.

In that empty stadium, they could hear their own madness clearly without the interference of the crowd.

They drove away from that stadium knowing that they are not always going to be in power, that there are something things the Zimbabwean people will not let them get away with, and that in life and politics there is no such thing as eternal impunity.

Earlier this year, I hand-delivered a letter to E.D. at State House where I let him know it was the people in his own circle that would bring him to his own ruin. Since the November 2017 coup, we have watched him and his regime squander the amazing amount of goodwill it had been extended by the people of Zimbabwe and the international community faster than anyone could say “E.D. Pfee.” No President has been on a faster track to be crowned Africa’s worst leader than our very own. No leader stubbornly refuses to learn the free lessons of history more than he does.

The end of such regimes and such leaders is never good, not because of the sinister hand of any “Third Force” but because of the perfect storms of circumstances delusional leaders create for themselves and which invariably swallow them up.

Zanu(PF) leaders poison themselves daily with the lethal ideological concoctions they brew in the cauldron of self-deception, corruption and incompetence. Professors and clergymen and women and diaspora Zimbabweans who underestimate the power of this witches brew to impair their reasoning and compromise their character drink it at their own peril.

E.D. Mnangagwa owes the people of Zimbabwe one act of statesmanship which unfortunately he has so far not demonstrated he is capable of. The hope of every Zimbabwean is that the empty stadium might have induced a moment of lucidity that would convince him that the country is worth saving more than Zanu(PF), and that if a stalwart of apartheid-like F.W. De Klerk could steer South Africa to democracy, he too can be the champion of the transition our country must make now to total emancipation.