Zimbabwean President Emmerson Mnangagwa demanded an end to U.S. sanctions as the government declared a public holiday and called on people to demonstrate against the penalties. 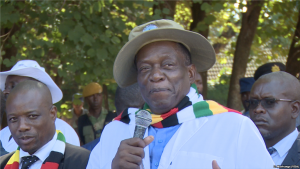 “The continued judgment and setting of Utopian standards for Zimbabwe are callous, vindictive and should not be allowed to continue,” Mnangagwa told supporters in an address at the National Sports Stadium in the capital, Harare. “We say enough is enough. Remove sanctions now.”

Sanctions against some individuals in the ruling Zimbabwe African National Union-Patriotic Front and businesses associated with them were imposed back in 2003. The U.S. has made periodic amendments to include people the State Department believes are responsible for human-rights abuses or enriching themselves at the country’s expense.

Zimbabwe has received more than $3 billion in U.S. aid since 1980 and at least $300 million this year alone, the U.S. Ambassador to Zimbabwe Brian Nichols said in an interview with newspaper publisher Trevor Ncube that was posted on the U.S. embassy’s Twitter account.

The U.S. is Zimbabwe’s single-biggest donor. Despite diplomatic tension between the two countries, American aid kept Zimbabweans from starvation after former president Robert Mugabe authorized the often violent seizure of about 90% of all white-owned farms between 2000 and 2012. That cost the country millions of jobs and saw farm exports almost disappear.

“Our targeted sanctions are not responsible for Zimbabwe falling tragically short of its potential. The fault lies in the catastrophic mismanagement by those in power and the government’s own abuse of its citizens,” Nichols tweeted Thursday.

The Southern African Development Community reiterated an August call for all forms of sanctions against Zimbabwe to be removed.

Sanctions “directly impact on employment and income generation opportunities, and thus the livelihoods of the ordinary Zimbabweans,” it said in an emailed statement Friday.