Africa Albida Tourism has scooped two awards - including one for the hospitality group’s move to eliminate single-use plastic across its operations - at the Corporate Social Responsibility Network Zimbabwe Responsible Business awards event in Harare. 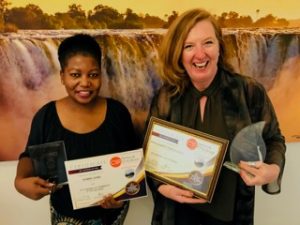 The 2019 Zimbabwe National Responsible Business and CSR Awards, held on November 21, at the Rainbow Towers Hotel, are based on the contribution being made by individuals and organisations in the private and public sectors towards community development in Zimbabwe.

AAT chief executive Ross Kennedy said: “Being recognised for doing good things very well, especially when they make such a positive impact on the community, conservation and indeed society, is extremely rewarding and satisfying.

“Enormous respect and admiration must go to Andy Conn, Charlene Hewat and her team for their relentless endeavours to recycle and create opportunity and income for community members,” Kennedy said.
“We are also so proud to see our individual team members and colleagues at Africa Albida
Tourism recognised for their contribution, energy and dedication,” he added.