Poverty and unemployment send locals in search of rays and sharks for the Chinese trade while trawlers net the rest.

Mozambique, Maputo – Near the old port of Nova Sofala, fishermen walk into the sea with nets, but their catch is not for the pot.

Instead, they’re after sharks and turtles, slicing off the fins and drying the shells for sale to Chinese buyers who ply the coast in 4x4s.

Shark fin soup is a delicacy in China but, with a population of 1.4bn, the country can’t get enough.

Further south, manta rays are the one to get. Asian medicine treasures a small piece of cartilage behind the gill of the ray though, as with rhino horn, it has no medicinal value.

Nova Sofala was used as a harbour by the Mwenemutapa Empire of Great Zimbabwe in the 16thcentury. With the establishment of Rhodesia in 1890, the port moved to Beira, purpose-built to serve the land-locked country. 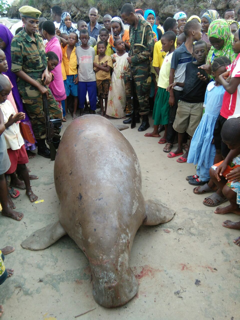 A dugong, dead on the beach, awaits the knife ©Vic Cockcroft

The collapse of Zimbabwe’s economy from the second-most diverse in Africa to one of the world’s poorest has meant hard times for central Mozambique. But the new market in marine life has boomed to a point where biologists talk of an “imminent extinction” and a need for “action matching the efforts to save gorillas, rhinos and elephants.

Zimbabwean researcher, Victor Cockcroft, said dugongs had been among the worst casualties.

“These mammals have been known to sailors for millennia and gave rise to the legend of mermaids,” he said. “Fifty years ago they were common from Somalia to northern Zululand and seen in groups of a hundred or more.

“Now we’re lucky to spot them solo or in pairs and, along 99 per cent of their former range, they have been wiped out.”

He said manta rays, whale sharks and hammerheads could “vanish within a decade”.

Pull every kind of life from the water

The Mozambique Channel has long been famous for some of the best sport fishing in the world. Stretching more than a thousand miles from north to south, it is bounded by Mozambique on the one side and the island of Madagascar 260 miles to the east.

Originally from California, Dr. Andrea Marshall has been researching the area for almost 20 years and did her doctorate here on manta rays. She is also a director of the US-based Marine Megafauna Foundation.

“Until recently we had really healthy populations of animals, but we have seen a rapid decline in coastal and deep water species, especially manta and devil rays,” she said.

“At night, the horizon is full of lights from fleets of fishing boats that pull every kind of life from the water, including some of the most threatened species.”

Between them, Mozambique and Madagascar have issued hundreds of licences for commercial fishing, mostly to Asian operators, and researchers say the fall in marine life corresponded with arrival of the vessels.

A court case is currently underway in New York over what prosecutors say was a multi-million-dollar fraud that sprung from Maputo’s purchase of trawlers for its own fleet, and patrol craft to monitor illegal activity in the channel.

Wild Oceans is an NGO based in Durban that monitors marine conservation across Africa. Its director, Dr Jean Harris, said there was need for an immediate review of ‘foreign fleet agreements” in the western Indian Ocean. 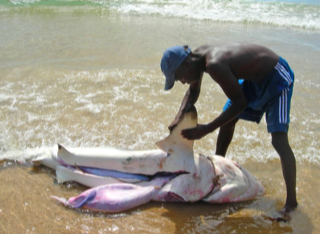 Finishing act: a fisherman removes a fin for sale to Asian buyers

“We have EU and Asian vessels working in African waters, some licensed and others not. We need an audit of how this is impacting our region’s stocks and biodiversity, especially where unselective methods like long-line fishing and net trawling are used.”

Dr Harris was especially critical of EU fleets. “These companies are subsidized from Brussels, and come here because they’ve already depleted their own stocks”.

She said there needed to be “a reassessment from top to bottom” of the fishing industry and its impacts on biodiversity and food security in Africa.

“Fish and marine creatures including sharks, turtles, even dolphins are being removed from the sea in tons, and some of our species will vanish altogether in a very short time unless action is taken now.”

She said the conservation measures used on land should also be applied to the sea.

“If these were rhinos or elephants, there’d be an outcry, and rightly so. But some of our marine species are just as endangered, and being killed in far greater numbers.”

Another researcher said the Channel “could soon be like a swimming pool: clean, blue and devoid of life”

In Cape Town, Craig Smith of the World Wildlife Fund said the effects of climate change were making the situation even worse.

“The southwest Indian Ocean which includes the Mozambique channel is recognized as one of the most marine biodiverse hotspots on the planet and provides a source of livelihood and food for millions,” he said.

Mr. Smith who works on the WWF oceans program said the region was being affected by overfishing, pollution and habitat destruction.;

“Moreover, climate change has the potential to amplify all the other threats,” he said.

In Maputo, the Ministry of the Sea, Inland Waters and Fisheries says Mozambique loses more than $60m a year to illegal fishing.

National director of operations, Leonilde Chimarizene, said signs marking out protected zones were ignored and the number and variety of fish caught was not always declared.

She said protected species were being caught both at sea and from the shore.

In Mombasa, Kenyan marine biologist, Dr Melita Samoilys, who was lead author of a recent paper on Mozambique and its fish said little would change while the country suffered, “high levels of poverty and illiteracy in coastal communities”.

She said there was a need for patrols at sea and on land, “but too often coastal fishers are blamed when, really, they have little alternative.”

She said poverty lay at the heart of the problem.

“At the same time the decision to allow foreign fishing fleets offshore was largely financial and made with no consultation with coastal communities. And these catches are rarely monitored.”

And, so, from Maputo in the south where meat from endangered species can sometimes be found at the market, to Vilanculos, a centre for diving tourism, and north to the once busy ports of Beira and Nova Sofala, all the way to the border of Tanzania, the hunt is on for shark fins and anything else that may turn a dollar for millions who have no other work.

“Problems with over-fishing occur all around Africa, but the Mozambique Channel is especially hard hit with boats, nets, even poachers who work from the beach,” he said.

“The late Diane Fossey introduced the world to gorillas and helped bring attention to their plight. Jane Goodall did the same for chimps.

“We have yet to find a hero for creatures of the sea that are just as threatened.”