The striking physicians's representative have said the government is negotiating in bad faith and clearly doesn't care about the healthcare system of the country. 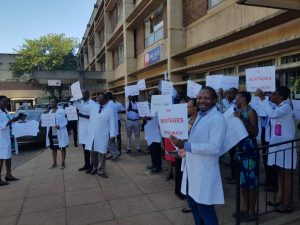 This was said by the Zimbabwe Hospital Doctors Association’s(ZHDA) Tapiwa Mungofa who said:

In doing so we maintain that we have not committed any crime by being broke. We eagerly wait to see how this move which defies all common sense will serve as a solution the already strained healthcare system.

The doctors have been on strike for 64 days and yesterday the govt decided to fire the striking doctors as a disciplinary measure.