HARARE (Reuters) – Zimbabwe state doctors who were fired for going on strike have rejected a government offer to return to work, their union said on Friday. 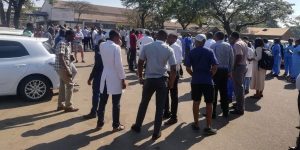 The doctors went on strike on Sept.3 to protest against poor wages, in some cases less than US$100 a month.

President Emmerson Mnangagwa’s government, which responded to the job boycott by firing 448 doctors and pursuing disciplinary action against more than 1,000 others, on Thursday offered to reinstate them if they returned to work within 48 hours.

Zimbabwe is experiencing its worst economic crisis in a decade that has seen resurgent inflation soaring to three-digit levels, eroding salaries and bringing back bitter memories of the hyperinflation era of a decade ago.

According to the Zimbabwe Hospital Doctors Association (ZHDA), the last wage offer by the government would see the doctors earning a total package, including allowances, of Z$3,900 (about US$240) per month.

“Sadly, the moratorium has come without a new offer on the table having been communicated to us,” ZHDA said, explaining its rejection of the offer.

The strike by junior and middle-level doctors has paralyzed state hospitals, used by Zimbabwe’s poor majority. Even before the strike, the hospitals had already been struggling with shortages of drugs and other basic products.

Critics say President Emmerson Mnangagwa has failed to keep promises he made in last year’s election campaign to revive the economy by pushing through reforms, attracting foreign investment and rebuilding collapsing infrastructure.

On Thursday Parirenyatwa Hospital, the country’s biggest, was deserted, with only a handful of desperate patients being attended to by nurses.

Sheila Muzanenhamo, who lives in one of Harare’s poorest townships, Epworth, grimaced as she explained how she had been turned away from the hospital because there was no doctor to attend to her.

“I have been here since dawn, hoping to get assistance but the nurses said they could not help me,” said Muzanenhamo. “They told me to go to private doctors, but I have no money to pay for that.”