Now he says life is more brutal than ever for Zimbabweans 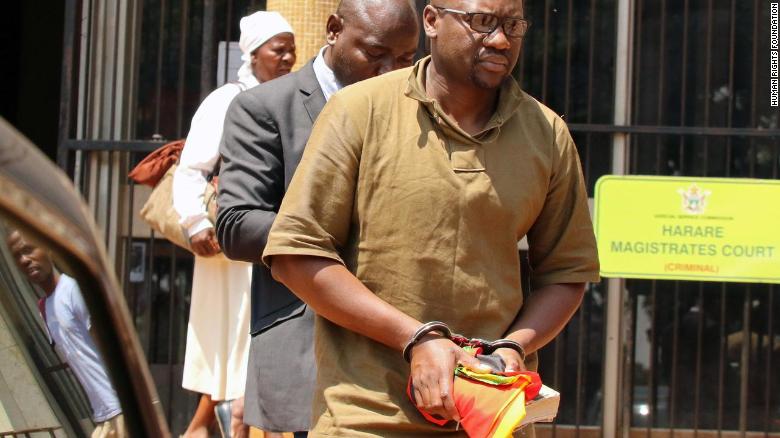 Zimbabwean pastor and activist Evan Mawarire clutches his Bible after being arrested and sent to Harare’s Magistrates Court.

(CNN)It’s been just over two months since Zimbabwe’s former President Robert Mugabe died, and almost two years since he was ousted from office, but some Zimbabweans say life is tougher than ever.

When Mugabe stepped down unexpectedly in 2017, after 37 years in power, there was widespread jubilation, but that quickly dissipated as it became clear that it was business as usual for the new government.
One of those who shared the initial sense of elation was Evan Mawarire, a pastor, activist and founder of the #ThisFlag movement. Mawarire gained prominence in 2016 when he draped himself in a Zimbabwean flag and railed against government corruption and lack of accountability in an online video.
His protests became popular and caught the attention of the Mugabe regime who detained him for “inciting public violence.” Mawarire was released a day later after mounting public pressure.
“Seeing Robert Mugabe step down was unbelievable,” said Mawarire. “The atmosphere was just euphoric. It was something none of us expected to see in our lifetime.”
“The expectation was that from here on truly things are going to get better because there’s no way they can get worse. Robert Mugabe was the worst.”

However, in the two years since Mugabe’s successor Emmerson Mnangagwa has been in power, conditions have deteriorated. Zimbabwe’s economy has plummeted further with inflation now hovering around 300%.
Add to that a fierce crackdown on any type of criticism of the government and the future of Zimbabwe looks bleak.
“We’re in a country where the basic freedoms that are provided for in the constitution for citizens are being blatantly violated. People are not allowed to speak freely, the amount of arrests that have taken place of people who have spoken out or against the government is shocking,” said Mawarire.
Mawarire claims that, “In just two years, Emmerson Mnangagwa has charged more people who have spoken out against the government than Robert Mugabe did in 37 years.”
CNN cannot independently verify those claims. We contacted Zimbabwe’s information minister about Mawarire’s claims — but did not receive a response.

A thorn in government’s side

Mawarire’s popularity and calls for justice continue to make him a thorn in the government’s side. An online video of him voicing his frustration during protests against a 130% fuel hike in January led to him being arrested and sent to jail once again.
He, along with trade union leader, Peter Mutasa, were charged with attempting to overthrow the government and sent to the country’s notorious Chikurubi maximum security prison.
Mawarire was released on bail almost two weeks later.

NATIONAL STAYAWAY IS ON WITH IMMEDIATE EFFECT. Mon 14, Tues 15, Wed 16 Jan 2019. Together with @ZctuZimbabwe we call on all citizens to participate in calling this Gvt to order concerning this major crisis. NO WORK, NO SCHOOL, NO BUSINESS. Remain peaceful #Zimshutdown #WeAreOne 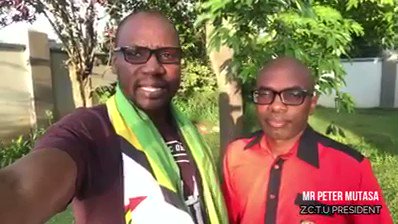 “It’s what I saw in that prison that was deeply, deeply traumatizing and disturbing,” Mawawire said.
“The men who had been arrested and taken from their homes and falsely accused of participating in this protest had been beaten. Many of them had broken limbs and we also had a lot of underage people arrested. I think the youngest was 15 years old.”
That’s when Mawarire understood how far the regime was willing to go to silence dissent, he said.

‘A contempt for basic freedoms’

There have been accusations of a spate of government-sanctioned activist abductions under Mnangagwa’s rule. Three months ago, the heads of several civil society organizations said six people were abducted and tortured after clashes ahead of planned opposition protests.
A well-known comedian, Samantha Kureya, was also reportedly abducted in August after publishing a skit on police brutality. She said she was taken by masked men from her house, assaulted and forced to drink sewage water over several hours, before being dumped naked on the side of the road.
Amnesty International has also criticized Mnangagwa for his “blatant contempt for basic freedoms.”
In an August 26 statement, Muleya Mwananyanda, Amnesty International’s deputy director for Southern Africa said, “What we have witnessed in Zimbabwe since President Emmerson Mnangagwa took power is a ruthless attack on human rights, with the rights to freedom of expression, peaceful assembly and association increasingly restricted and criminalized.
“The authorities … have demonstrated that there is no space for dissent in the so-called ‘new dispensation.’ Time and again they have resorted to the same brutal tactics that were used by President Mnangagwa’s predecessor Robert Mugabe to clampdown on human rights.”
The minister of information did not respond to requests for a comment on the Amnesty statement.
President Mnangagwa has said previously that his regime will apply “the rule of law without exception.”
“Let it be known that under the Second Republic, the rule of law shall be applied without exception. My Government will not allow the abuse of the constitutionally enshrined democratic rights and freedoms … Acts of subversion, lawlessness and civil delinquency disguised in whatever manner will not be condoned. The law will apply without fear or favor,” he said at the funeral of one of his army chiefs.

Eleven months after his arrest, Mawarire is still awaiting trial.
Speaking in October at the Oslo Freedom Forum in New York, Mawarire explained how his parents had to sign over the title deeds of their property to the government, in order for him to be released on bail.
His bail conditions demand he reports to the police once a week and international attention on his cause often results in what he describes as “the regime punishing me,” accusing him of being funded by the West and making an example of him.
“There is a difference between protesting under Robert Mugabe and Emmerson Mnangagwa,” Mawarire said, describing what he said are different levels of brutality under the two leaders.

What followed was regrettable and tragic. Everyone has the right to protest, but this was not a peaceful protest. Wanton violence and cynical destruction; looting police stations, stealing guns and uniforms; incitement and threats of violence. This is not the Zimbabwean way 2/4

Likewise, violence or misconduct by our security forces is unacceptable and a betrayal of the new Zimbabwe. Chaos and insubordination will not be tolerated. Misconduct will be investigated. If required, heads will roll 3/4

“Mnangagwa is prepared to kill people and he’s done it. He’s prepared to deploy the military with live ammunition and shoot into a group of protesters. He’s done that twice in two years.”
On August 1, 2018, and in January 2019, the Zimbabwean government did indeed send the military into crowds with live ammunition, tear gas and water cannons used to quell protests.
At least 12 people were killed, and 78 people were treated for gunshot injuries sustained during the January crackdown, according to the Zimbabwe Human Rights NGO Forum, which said it recorded more than 240 incidents of assault and torture and hundreds of arrests.
The violence was condemned by international monitoring groups and Mnangagwa pledged an independent investigation into the crackdown calling it “regrettable and tragic.” The army blamed “bogus elements” in the opposition.
So far nothing has come of it and the information minister also did not respond to a request on the status of the investigation.

A sense of hopelessness

As Zimbabwe’s economy continues to spiral into free flow and protesters are met with force, a sense of hopelessness envelops the country, said Mawarire.
Health care is floundering due to daily power cuts and an acute shortage of both medicines and fuel, and unemployment is on the rise.
A severe drought has also led to a desperate hunger crisis in the southern African nation with more than two million Zimbabweans at risk of starvation, according to the Wolrd Food Programme. In June, the UN estimated that more than 5 million people — a third of the country’s population — will need food and humanitarian assistance by next year.
“As long as Zanu-PF is in power, as long as the same people are running the country … there will be no change, It’s the same bus, different driver,” said Mawarire, in a reference to Mugabe’s Zanu-PF party, which has been in power in Zimbabwe since the country gained independence in 1980.
Post published in: Featured