The MDC national executive met today for seven hours and spent the better part of the meeting deliberating on the deteriorating situation in the country, particularly the worsening plight of the ordinary citizens. 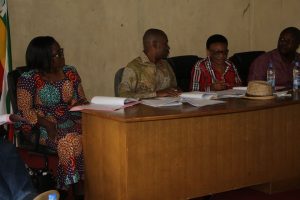 The executive, a key organ of the party, discussed and charted the way forward on the following key national issues.

1.The national situation
The national executive deliberated on the deteriorating political, economic and social situation in the country. In particular, the executive noted the rising cost of basic commodities as well as the slow genocide in the country’s hospitals, where the illegitimate regime has fired yet another batch of doctors for raising legitimate concerns about their wages and working conditions. They haven also raised issues about lack of medicines and other medical consumables to enable them to save lives.

2.Food insecurity
About 8,5 million people in the country are food insecure and the party noted with serious concern that the illegitimate regime had begun politicizing food in the rural areas. The party resolved to do all within its remit to stop the abuse of a key livelihood issue such as food.

3.Legitimacy crisis
The executive affirmed that the economic governance crisis in the country and the challenges facing the nation are symptomatic of the legitimacy crisis arising out of the stolen election of 2018. Unless and the until the legitimacy crisis is resolved, there will be no reprieve on the dire national situation as the people running government do not have the requisite confidence and mandate from the people.

The executive noted that the legitimacy crisis has led to the breaking down of the social contact, particularly between the leading and the led.

4.Elections
The party’s continued participation in by-elections has exposed the dire need for prudent electoral reforms. A compromised election management system, the murkiness around voting material, the abuse of traditional leaders and the use of food as political weapon continues to be rampant in the countryside, justifying the need for genuine electoral reforms. To this end, the party’s parliamentary caucus will table an alternative Electoral Bill that guarantees the holding of credible and legitimate elections that do not breed contested outcomes.

The party resolved to set aside a day every year to remember and salute all survivors of political violence, living or dead, who have been victims of State-sanctioned brutality.

6.Parliament
The party deliberated on developments in parliament, particularly Zanu PF’s attempt to reverse the democratic gains enshrined in the Constitution. The national executive resolved that the people’s deployed to the August House must use the arena of Parliament to table alternative Bills as well as pro-poor motions that further citizens’ rights, widen democratic space and further the people’s democratic agenda. The party resolved to continue pressing for alignment of laws to the Constitution, and not amendment of the Constitution, itself made and affirmed by the people themselves in a referendum.

8. Local government
The executive noted the challenges faced by MDC-led councils and bemoaned the fact that in most of these councils are MDC-led but are not MDC-controlled. Zanu PF has centralized most of the key operations of local authorities, such as procurement. The party noted that Zanu PF has usurped key operations of councils in a manner that has curtailed the autonomy and the full independence of local authorities, in the process grossly interfering with service delivery. The party resolved to continue supporting the local authorities that it runs to ensure that they deliver prudent and affordable services to the people.

9.Resolving the national crisis
The party resolved to stand on the side of the people. The party will continue mobilizing locally and internationally for a cogent and robust #FreeZimbabwe campaign that must eventually yield a legitimate people’s government.